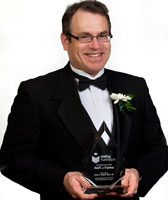 The College of Business at Bowling Green State University is pleased to announce the new associate director of the Paul J. Hooker Center for Entrepreneurial Leadership is BGSU alumnus Brian Sokol, an executive whose operational cornerstone is innovation as well as a patented inventor or co-inventor on multiple high-profile consumer products. This newly created position will work closely with the current director of the Center, Kirk D. Kern.

After receiving his marketing degree and later MBA from BGSU, Sokol embarked on a series of ascending sales and marketing roles in public and privately held corporations. He implemented marketing commercialization plans globally as vice president of marketing for Loctite Corp.

By the age of 35, Sokol was president of the automotive appearance products company Blue Coral which was later sold to Quaker State Oil Company after achieving significant growth. As president of Quaker State Consumer Products Group, and later Pennzoil, Sokol led the acquisitions and mergers of several well-known companies and reconstructed the entire supply chain. Some of the new technologies invented under his leadership included RainX windshield wiper blades and Tire Wet tire dressing.

“We are excited that a highly successful, distinguished entrepreneur of Brian’s caliber has joined the Paul J. Hooker Center for Entrepreneurial Leadership to help us continue to launch new businesses and drive economic vitality in this region,” stated Kern. “We look forward to having Brian’s innovative insight and energy.”

The Paul J. Hooker Center for Entrepreneurial Leadership in the College of Business is one of 20 centers worldwide recognized by the Association to Advance Collegiate Schools of Business (AACSB).