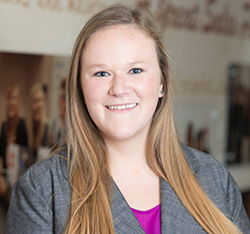 Miller can add another award to her list of accomplishments. She was one of three interns in Ohio and one of 50 nationwide, who was awarded a $5,000 Scholarship by The Council Foundation created by the Council of Insurance Agents and Brokers.

Ben Goff, executive vice president of Brown & Brown of Ohio, nominated the BGSU senior who showed sales talent early on in college. “I first met Jessica in the fall of 2013 when she was the only freshman competing in the BGSU Sales Competition and was impressed with her drive and determination to win. In the spring of 2015, Jessica began an internship with Brown & Brown of Ohio, located in Perrysburg, and was one of only 15 interns from around the country to travel to Daytona Beach and visit our corporate headquarters later that summer.”

Goff continues, “I was proud to nominate Jessica for this scholarship. She is, in my opinion, an outstanding example of the quality of students coming out of BGSU and the College of Business, and we are looking forward to having her officially join our team after graduation.”

Miller is thrilled to have been nominated and chosen for this prestigious award. “I feel extremely honored and grateful to be a recipient of the inaugural Council Foundation Scholarship. This scholarship is helping me to finish my last semester here at BGSU strong and helping to alleviate some of the financial burdens I feel as a student paying for my own education.”

She adds, “The application process included a letter of nomination, an essay, and a three-minute video on what the scholarship selection committee should know about the applicant.”

Miller states, “I would like to send a special thanks to Ben Goff and Angela Krueger for bringing this opportunity to me and Jeanine Adams for helping me make the most amazing video!”

According to Goff, “The CIAB scholarship has been established to recognize those undergraduate students interested in a career in the insurance industry. Winning students exhibited exceptional promise and demonstrated success in their college career.” Brown & Brown is only one of 10 national firms that participated in this program in 2016.

After graduation in December, Miller will take on the role of Community Accounts, specializing in Small Business and Personal Lines insurance at Brown & Brown.