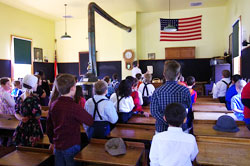 There is a place on campus where visitors and students alike can go back more than 100 years in time to the days of McGuffey’s Readers, dunce stools and central heating via potbellied stoves. This “magical” place is Bowling Green’s Little Red Schoolhouse. The building contains items representing the educational system of the late 19th and early 20th centuries in America.

The red brick building, which houses the University’s collection of educational artifacts, was originally built in Norwalk Township, Huron County, Ohio, in 1875 and was known as the District #6 School. It held eight grades in its one room and did not close its doors until 1938 when the Norwalk-Brunson District began serving the pupils of the area. 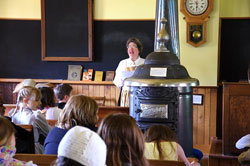 In 1972, Dr. David Elsass ’49, ’53, dean of the College at that time, and Robert Shelton ’28 launched a campaign to secure $64,000 to bring a one-room schoolhouse to campus to house its growing collection of educational memorabilia – an idea originally suggested in 1968 from then-president William Jerome. With $14,000 in private donations, and a volunteer offer from Dr. Dan Heisler and his sons to dismantle and move the building, unfortunately the cost of the initiative was not covered.

State Representative Arthur Wilkowski of Toledo heard about the project and volunteered to introduce an amendment to the State Lottery Appropriation Bill to assist in generating the unsecured dollars. Dr. Elsass and others presented testimony in 1974 to the Ohio General Assembly, which resulted in a $50,000 allocation from the first Ohio Lottery Appropriation (H.B. 1263). 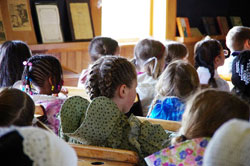 In 1975, Becky Linder, a sophomore education major, informed Dr. Elsass that the Linder family of Norwalk, Ohio, would donate to the University the school building, which stood on their farm land. The Heisler sons – Terry, Barry and Danny – spent nine weekends with their father dismantling and moving the schoolhouse from its original location to Bowling Green. A contracting firm then re-assembled the schoolhouse, adding a new wood frame, a new wood floor and a new roof. Electric fixtures were installed and camouflaged with old-fashioned kerosene fixtures. Heating and air-conditioning were also installed to provide the best possible atmosphere for the artifacts.

In 1976, just prior to its dedication, more than 49 people from the Norwalk area visited, many of whom had attended this Little Red Schoolhouse, including the last teacher, Ila Wolf Dolby.

Since its dedication, school children who visit learn what it was like to attend a one-room school. During its years of operation, the enrollment of District #6 School ranged from eight to 37 students. Boys and girls entered through separate doors and sat on separate sides of the classroom. They even played in different areas during recess. Popular recess games included baseball, jump rope, crack the whip, fox and geese and pom-pom pullaway. When bad weather kept them inside, they played “Old Cat” and tic-tac-toe on the chalkboard, or gathered around the piano to sing.

Rules for children in a one-room schoolhouse were similar to those found in today’s classrooms – assignments had to be done on time and talking was not allowed. However, children attending school more that 125 years ago had to perform duties not common in today’s schools. Wood or coal had to be brought in for the stove during the winter months, and someone had to get water from the well so that everyone had something to drink at lunch.

Teachers had interesting rules as well. Teachers, who were typically women, had to check the outhouses daily. Additionally, she couldn’t marry during the term of her contract; couldn’t loiter downtown in ice cream parlors; couldn’t smoke cigarettes; couldn’t join any feminist movements; couldn’t ride in any carriage or automobile with a man unless it was her father or brother; and, couldn’t dress in bright colors. If she performed her duties regularly and faithfully for five years without fault, she would be given a 25-cent-a-week increase in pay, providing the Board of Education approved.

Education has experienced great changes since the days of one-room schoolhouses, and will undoubtedly experience more changes in the future. The Little Red Schoolhouse enables us to look at education’s past, and gives visitors a sense of history.

The Schoolhouse is open to visitors on weekends from 2-5 p.m. To schedule a visit for your classroom or organization, contact us at 419-372-7401 or dleuck@bgsu.edu.