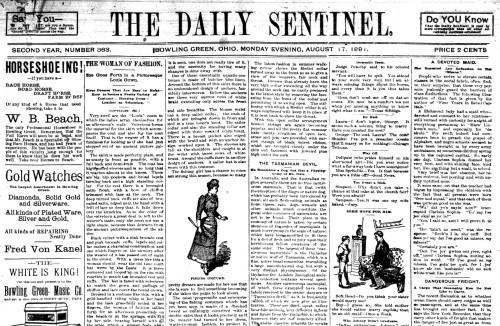 Entries first are arranged by the city in which the newspaper was published, then alphabetically by the most recent title used by the newspaper. The data following the title includes frequency, type of newspaper (e.g., general, collegiate, religious, etc.), its editorial politics, its title variations, and special notes on mergers or other information. Finally, the CAC holdings are listed. Titles resulting from mergers are treated as separate entries. For example, the Carey Progressor merged with the Carey Times to form the Progressor Times. Each of the three titles is listed separately. If the new title is superseded by a title variation, appropriate cross-references are made to the latest title. Titles listed in the variations are not cross-referenced; therefore, researchers should examine the notes on variations for all newspapers within the appropriate city to determine if the CAC holds a specific title. The entries also note, by using an asterisk (*), if the newspaper or portions of it are on microfilm. Microfilm does not circulate, but may be borrowed through interlibrary loan.

Before the days of wire services or news bureaus, newspapers frequently printed letters from local soldiers to provide more in-depth coverage of war news. Since regiments were recruited by geographical regions, most of the men serving in a unit were neighbors, and their families often shared letters with each other. Some soldiers specifically arranged to send reports of company news to their hometown newspapers. This index, prepared by Dan Masters, records soldiers' correspondence printed in area newspapers during the Civil War. Researchers should be aware that this index does not necessarily represent the holdings of the Center for Archival Collections.

Local newspapers frequently printed letters from local soldiers to provide more in-depth coverage of war news. These indexes, prepared by Dan Masters, Steve Badenhop, and Alexandra Hutchings, record soldiers' correspondence printed in area newspapers during World War I. Researchers should be aware that these indexes do not necessarily represent the holdings of the Center for Archival Collections.