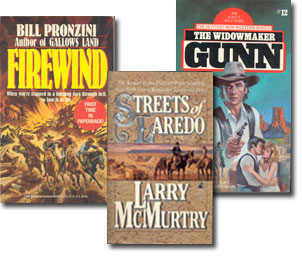 Westerns have been one of the most popular genres for decades.  Novels by Zane Grey and, especially, Louis L’Amour are still regular sellers at book stores.  Books by Larry McMurtry are also very popular, as are the films made from his books.  The field is changing somewhat, though, with books set in the West sometimes called historical or frontier fiction.

“The appeal of this genre is worldwide, based in a dream of freedom in a world of unspoiled nature, a world independent of the trammels of restraining society.”  (Betty Rosenberg, originator of Genreflecting, summarizing the appeal of westerns)

The BPCL has a substantial collection of westerns from major and minor authors in our main fiction collection.  Western stories also feature prominently in our story paper and nickel weekly collection, as well as the pulp magazine collection.

Adventure stories seem to cover four basic themes – stories of survival, exploration, battle, or intrigue.  In the earlier part of the 20th century, the most popular adventure subgenre was espionage or spy novels, which basically ended with the end of the Cold War.  After that, the focus shifted to technothrillers, which also seem to be very popular.  In addition, action/adventure films always seem to do exceptionally well at the box office.

“The heroic exploits of larger-than-life protagonists and the ultimate triumph of the good guys over the bad guys are driving forces in this type. Strong plots, heavy with action, are powerful lures to readers.”--from Genreflecting

The BPCL has a substantial collection of adventure stories in our main fiction collection as well as in the story paper and nickel weekly collections and also the pulp magazine and vintage paperback collections.

The BPCL has been fortunate to acquire a large western/adventure fiction collection from noted popular culture scholar, Gary Hoppenstand.  The Hoppenstand Collection contains nearly one thousand monographs and features rare, first edition classics from the late Victorian and Edwardian periods and the early twentieth century.  The books are denoted in the library catalog by hoppenstand in front of the call number.