Vivian Stephens entered the world of romance fiction in 1978 as an editor at Dell. She was given charge of the Candlelight line of romances, despite having no experience with romance fiction previously. A Black editor in a predominantly white industry, Stephens sought to incorporate the voices of women of color into the burgeoning romance industry. In 1980, Dell published the first category romance by a Black author with Black protagonists- Entwined Destinies by Rosalind Welles (the pseudonym of journalist Elsie Washington). Stephens also made sure that Dell’s Candlelight lines included romances by Indigenous, Latina, and Asian authors, creating almost single-handedly the category that trade publications called “Ethnic Romance”.

In 1983, Stephens moved on to Harlequin, becoming the first editor of their Harlequin American line. Throughout her time as an editor, agent, and mentor, Stephens played a key role in launching the careers of authors such as Sandra Kitt, Jayne Ann Krentz, and Beverly Jenkins. 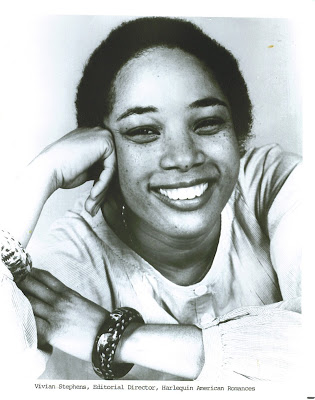 Stephens also played a key part in making romance novels steamier. Her Candlelight Ecstasy series for Dell pushed the boundaries being set by the two biggest romance publishers, Harlequin and Silhouette, by “going behind the bedroom door,” a taboo at the time.

One of the most important roles played by Vivian Stephens during her career in publishing was as the founder of the Romance Writers of America. A Houston-based group of authors looking to get their romance novels published approached Stephens for advice after the Southwest Writers Conference in 1979. She advised them to band together as the Romance Writers of America, convinced Dell to provide some financial backing, and convinced a group of other editors to attend the group’s first conference in the summer of 1981. Today the group has members from around the globe, and annually presents an award in Vivian Stephens’ name to a person from the publishing industry who has contributed significantly to the genre.

In the summer of 2018, the Romance Writers of America donated to the Browne Popular Culture Library a collection of books formerly used by Vivian Stephens during her days at both Dell and Harlequin. The collection includes books on women’s sexuality, editing and writing romance fiction, the publishing industry, as well as academic works on romance writing. A list of the books can be found in our catalog as The Vivian Stephens Collection.

We are thrilled to preserve this collection of books from a person as important to the history of romance fiction as Vivian Stephens. The books will serve as an important resource for scholars of the genre. We are grateful to both the Romance Writers of America and Vivian Stephens for this donation.