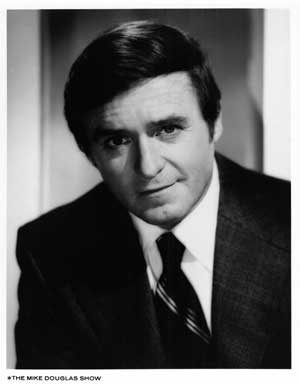 The Mike Douglas Show, originating in Cleveland, Ohio and later moving to Philadelphia, Pennsylvania, was a 90-minute program that dominated the ratings during the important weekday afternoon time slot. At its peak, the show was seen on 171 television stations and an average audience of six million viewers. From 1961 to 1981, Mike welcomed many diverse guests, from show business, politics, and current events. The Mike Douglas Show offered viewers a mixture of thoughtful conversations and wholesome entertainment. Douglas once described his personality and appeal to the mass audience by stating, “I’d have to say I’m square and I’m happy that I am.” His personality encouraged such personalities as Marlon Brando, John Lennon, Barbra Streisand, Rose Kennedy and Princess Grace of Monaco to choose his program for their rare talk show appearances. One such guest was two year old Tiger Woods, doing tricks and golf shots impressing comedian Bob Hope and actor James Coburn.

Mike also lent his co-hosting duties out now and then. Such was the case of the week of February 14, 1972, when Mike asked John Lennon and Yoko Ono to co-host the show. It was hugely risky and controversial, but Douglas knew it would open the show up to a whole new audience. It garnered the largest rating in the show’s history and still ranks as a milestone in television history.

Mike can claim one huge discovery too: he learned of a young comedian rising through the ranks of Philly nightclubs and invited him to appear on his show. That comedian was Bill Cosby; he also gave Jay Leno and Howie Mandel their start in show business.

Around 1966, Mike scored a Top 40 hit with “The Man In My Little Girl’s Life”. This was the time of the Beach Boys and the Beatles. Mike Douglas provided the singing voice of Prince Charming in Walt Disney’s animated version of Cinderella in 1950. Douglas’s singing career never matched the popularity of his television career, however he did sing daily on his show.

In 1981, the Nielson ratings reported the Mike Douglas Show as number one around the country. However, a new generation of executives had taken over at Westinghouse, with new attitudes, new philosophies of programming. These executives decided not to renew Mike’s contract and hire a new younger host, John Davidson. Davidson had co-hosted a few times for Mike. Mr. Douglas was understandably not pleased but gracefully accepted this decision. After a twenty year run, Mike bid farewell to Westinghouse, and was welcomed back on the air by over a hundred stations who had signed on to broadcast the new Mike Douglas Show through independent syndication. The Davidson Show was canceled after a brief run, but Mike and his staff did not gloat. After their syndication came to an end, Mike felt it was meant to be and was glad to end his television career on his own terms.

This album contains an assortment of black and white still photographs from the Mike Douglas Show when it was broadcast in Philadelphia, Pennsylvania.