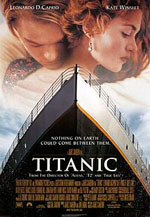 The R.M.S. Titanic, the largest and most luxurious ocean liner of its time, began its maiden voyage on April 11, 1912 and sank on April 14, 1912, two hours after hitting an iceberg, taking over 1500 souls with it to the bottom of the North Atlantic. The ship was seen as unsinkable, a testament to technology and man's superiority. The ship and its tragic ending have fascinated generations of people worldwide for over a century. Many books, movies, and songs have been written and filmed about the Titanic, but no tribute has been more embraced by the masses than James Cameron's Titanic. Released in December 1997, it tells the tragic tale of two young lovers caught in an impossible affair during the ill-fated voyage. The film, known as “the most expensive film ever made”, grossed nearly two billion dollars worldwide and won 11 Oscars. It made superstars out of its two lead actors, Leonardo DiCaprio and Kate Winslet, and created a cultural phenomenon that is illustrated in this collection, the Andrew Anthos Titanic Collection.

Andrew Anthos (pictured right) was an avid and devoted Titanic collector based in Detroit, Michigan. Through his generous donation, the Browne Popular Culture Library holds a treasure trove of information regarding the film, its release, its worldwide reception, its stars, and the historic Titanic.

This collection was initially inventoried by Matthew Diebler in 2006.  The collection was revised and the finding aid prepared in 2012 by Stefanie Hunker.