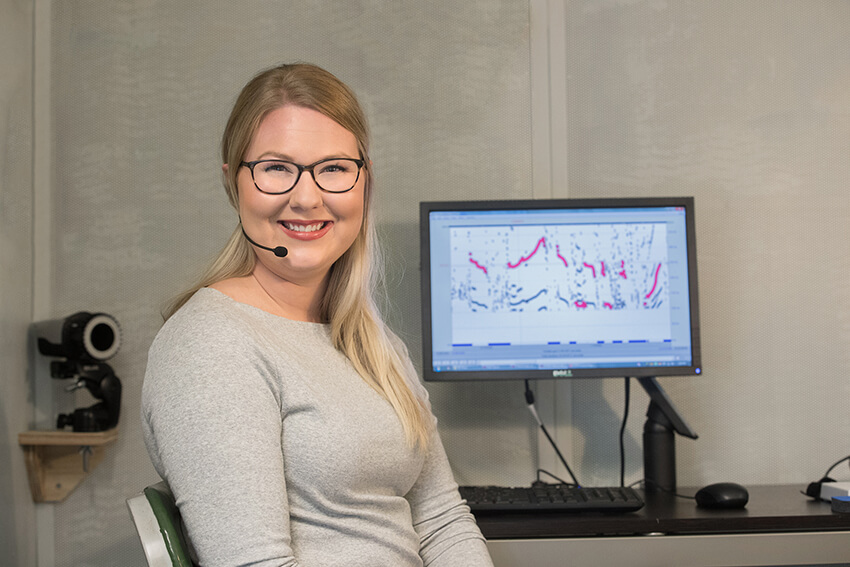 Zoe Kriegel, a Ph.D. student in the College of Health and Human Services, was recently awarded the Ohio Speech Language Hearing Association Research Grant for her research proposal, ‘Effects of Competition on Speech Physiology.’ Kriegel’s proposal was inspired by the competing demands speakers face in everyday communication.

“An individual may be washing dishes and talking at the same time. The brain has to coordinate all of the requirements for washing dishes — a circular pattern of the washcloth, rinsing, and placing the dish in the drying rack — all while listening to another person, formulating thoughts, and transferring those thoughts into words and speech movements,” Kriegel explained.

The proposal focused primarily on how these actions are increasingly more challenging for individuals with communication disorders, such as Parkinson’s disease.

“We are currently in the programming phase of the research process,” she said. “In a few weeks, young adult college students will be brought into our lab to participate in the protocol.”

During the protocol, participants will be guided by a computer led by a member of Kriegel’s team of researchers to study the chin to detect muscle activation during speech.

“This work is the first step in a longer line of work aimed at understanding speech disfluencies in speakers with Parkinson’s disease,” Kriegel explains.

Kriegel hopes that the research she is doing will have a lasting effect.

“The long-term goal of this work is to better understand speech disfluencies to inform treatment for speakers with communication disorders,” she said.

After being informed that she had been a recipient of the grant, Kriegel celebrated in a way that showcased her work ethic.

“There was certainly a moment of celebration after learning I'd been awarded the grant,” she said. “However, the celebration was quickly followed by the creation and refinement of a game-plan. A grant award is a contract to complete the work you've proposed, so there isn't much time to dwell on celebrating.”

Writing her research proposal and eventually winning the grant has helped Kriegel streamline her ideas and make them a reality.

“Writing the proposal has helped me to hone in my ideas and present them in a clearer way to others,” she explained. “The grant award has made it possible to more seamlessly synchronize the systems that will be used in the project and has allowed us to more efficiently synchronize and process our multi-channel data.”

For students in the College of Health and Human Services aiming to apply for grants and complete their own research one day, Kriegel had valuable insights to share.

“My advice to other students looking to apply for grants would be to fully participate in the writing process. Sometimes, the process includes talking with others about an idea, drafting a few sentences, finding another person's successful application and using your peers to help in revisions,” Kriegel said. “Spend time critically reviewing the Call for Proposals, email past winners to see whether they're willing to share a successful grant proposal with you and actively pursue critical review of your writing. Lastly, if your project isn't awarded, all is not lost. The process of writing a proposal is itself formative and will improve your next grant proposal.”