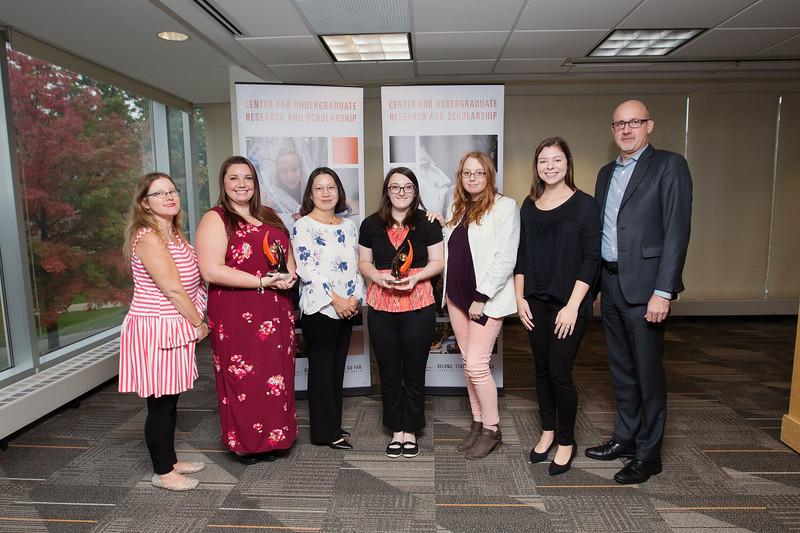 The Center for Undergraduate Research and Scholarship (CURS) encourages undergraduate students to participate in meaningful research in all fields of study. Each year, they host the Undergraduate Symposium for Research and Scholarship where students can present their findings. At the 2019 event, nearly 200 presentations were given. Last month, four winning presentations were announced- including two from groups in the College of Health and Human Services.

Hayley Landers, a senior Gerontology major, was among the winners of the symposium with her presentation ‘Occupational Therapy Success in Assisted Living Facilities’.

“Our research was on the success rates of occupational therapy in nursing homes. We asked different questions like ‘Can you tell us the rates of improvement that you see within your residents that are doing occupational therapy in their activities of daily living?’ and ‘What’s your discharge to home rate?’ and ‘How many of your patients have the goal to go home?’” she explained.

Landers was able to identify similarities between multiple patients and nursing homes.

“We found most showed some signs of improvement,” she said. “One thing that was common across the board was that everyone had the goal to go home. It was really cool to see that.”

Landers intends to pursue Occupational Therapy after graduation which inspired her research and helped her decide to have Dr. Cynthia Spitler, a Gerontology professor at BGSU, serve as her faculty mentor.

“Dr. Spitler was interested in doing something with older adults, and I wanted to look into that more and get to know the field I’ll be going into better,” Landers explained.

As her faculty mentor, Dr. Spitler helped support Landers throughout the research process.

“What impressed me was her motivation and ambition. She was taking 18 credit hours and had a lot of other things going on as well,” Dr. Spitler said.

The process of conducting their research, however, did not come without its challenges.

“Finding nursing homes that had occupational therapy was not easy. It was a little bit upsetting and kind of defeating when fifteen out of the twenty places we reached out to ignored us,” Landers said.

In the end, they were able to overcome their obstacles and learn from the trials they faced in the process.

“I think the most valuable thing I took out of the Symposium was that in the future when I am in the position of an occupational therapist and students are coming to me, I know how it feels to be on the student end of that. I know how to act, because I know how tough it can be,” Landers said. “So, I think the most valuable thing for me was learning what I can do in the future to help those students.”

Rachel Suzor, Kali Pugh and Amanda Burtch, seniors majoring in Social Work, participated in the Symposium to fulfill a requirement for Dr. HeeSoon Lee’s Research Methods course. Dr. Lee also served as their faculty mentor. They were not anticipating their presentation, ‘The Effects of PTSD on Family and Social Relationships among Post-Deployed Men,’ to be one of the winning research projects.

“We were just trying to fill a class requirement, but now we have this award! It was really validating that we actually did a good job,” Suzor said.

Additionally, their research looked at what those facing PTSD did to manage the side effects.

“We found veterans that had PTSD had effective coping strategies. Many of them said they would remove themselves from stressful situations, weight lift or use social support,” Pugh said.

In the end, their research found that veterans working to handle their PTSD had better interpersonal relationships than those who reported not having any coping strategies.

Their experience participating in the symposium helped them gain valuable research and presentation skills. “It helps with public speaking and interacting with people,” Suzor said. “It wasn’t just the judges you were presenting to, but anyone who came up and wanted to know more. Their questions made you think on your feet.”

The College of Health and Human Services being represented by these two winning groups shows what the students and faculty have to offer.

“I think it shows that the College of Health and Human Services has a lot of leaders. We’re putting ourselves out there, we’re knowledgeable and we know how we do research,” Pugh said.

The students were honored and recognized for their accomplishments on Monday, October 21st, 2019 where they were given a specially design trophy to commemorate their accomplishments. In addition to faculty mentors Dr. Cynthia Spitler and Dr. HeeSoon Lee; Dr. Cordula Mora, director of CURS; Dr. Joe Whitehead, Provost and Senior Vice President for Academic Affairs; and Dr. James Ciesla, Dean of the College of Health and Human Services also attended to honor the winners.

The College of Health and Human Services is proud of the students and faculty awarded and encourages others to participate the Undergraduate Symposium for Research and Scholarship. The next symposium is scheduled for April 18, 2020.