To promote our collections and allow access to the materials housed in the archives, the Center for Archival Collections curates in house exhibits and participates in exhibits on campus and in the community.

The CAC Reading Room is home to rotating exhibits of materials from our collection. Stop by the 5th floor of Jerome Library during our regular hours to see what we have on display. 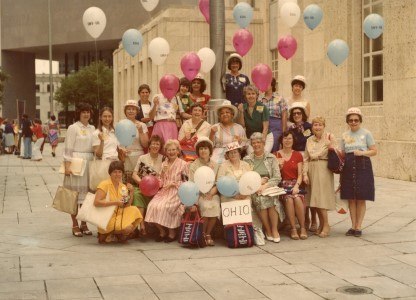 The League of Women Voters of Bowling Green, Ohio is a non-partisan group that encourages the women of their community to register and then go out and vote. While they are non-partisan, the League agree on multiple issues that involve vulnerable groups of people and ones that will affect the overall community.

The Cochrane Cunningham Archives is a collection of over 1074 linear feet that documents the history of athletics, physical education, men’s and women’s sports, and band and spirit at BGSU. It was conceived and created by former BGSU coaches/administrators Mickey Cochrane and Don Cunningham starting in 1985. The collection continues to grow in size thanks to new donations. Items from the collection can be seen in person at the Schmidthorst Heritage Hall gallery in the Stroh Center and the lobby of the Slater Family Ice Arena. These exhibits will change on a regular basis.

Stroh Center: Title IX and the History of Women's Sports 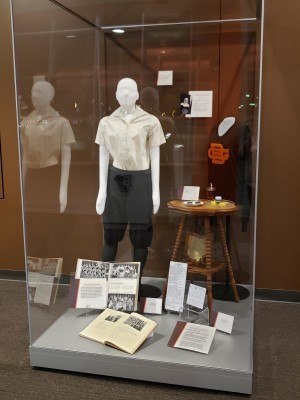 The Spring 2022 Schmidthorst Heritage Hall exhibit celebrates the History of Women’s Sports and the 50th anniversary of Title IX at BGSU.  From the 1920s to the present and “play for play’s sake” to NCAA Division I achievement, this exhibit explores the changing philosophies, priorities, and opportunities in women’s sports. Among other items, visitors will see a 1930s BGSU women's gym uniform, a boat utilized in Swan Club synchronized swimming competitions, a net from the last Anderson Arena game, and three historical Frieda Falcon costumes. The exhibit features perspectives from before, during, and after the Title IX transition, highlights of BGSU women's athletic achievements, and a tribute to the many people who have made women's sports possible at BGSU. 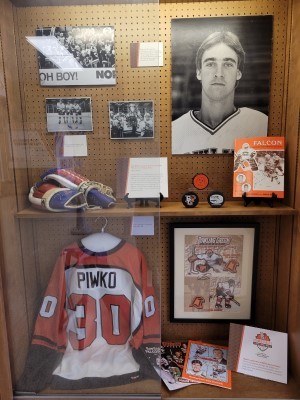 The current exhibit in the Slater Family Ice Arena illustrates the history of BGSU’s hockey program from its early days as a club sport, which was formed in 1963. Some notable items visitors can see are a circa 1970 goalie mask, personal scrapbook of coach Jack Vivian, game program from the 1984 NCAA Hockey Championship game at Lake Placid, New York, Dr. Sam Cooper’s recount of the first BGSU hockey club game in November 1963 vs. the University of Toledo, and gloves worn by Mark Wells ’80 during the 1980 “Miracle on Ice” Olympic Game vs. the Soviet Union.