Emily and Michael Werner share their stories, lead peer support at the college to help others

Emily and Michael Werner are open about their past and are offering hope and help to anyone who finds themselves walking the addiction path they once traveled.

The married couple – Emily ’22; and Michael '21, a veteran and current BGSU Firelands student – are in recovery from addiction and mental health challenges. They now take every chance to share their stories, whether that be in class or during community events. 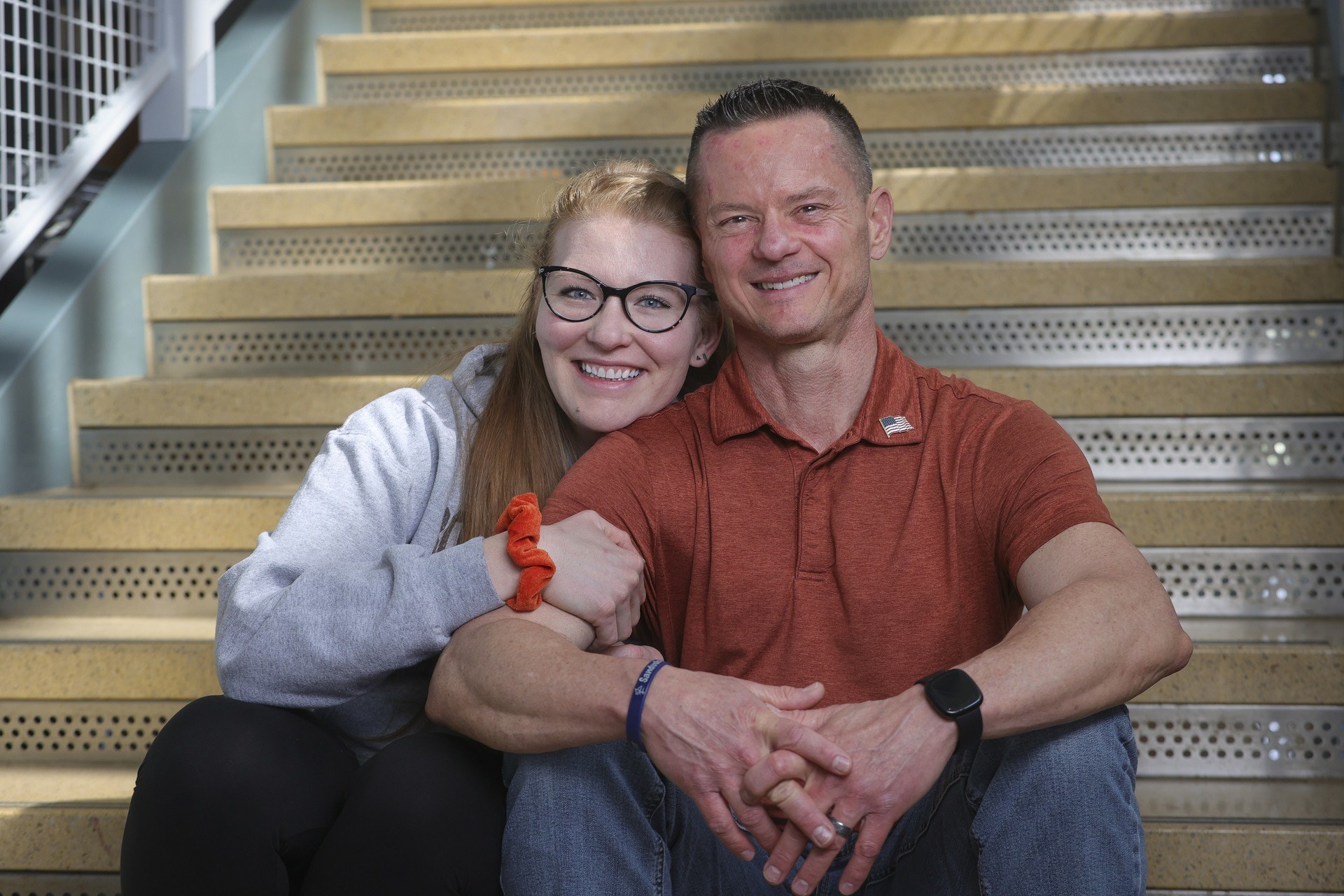 “I just couldn't stop,” Emily said, as she recalled the lengths she went to feed her addiction. "I stole from my family. You name it, I’ve done it.”

As community advocates and state-certified peer recovery supporters, Emily and Michael are known in the Sandusky, Ohio, region as symbols of hope in the addiction recovery movement.

This past spring, the couple hosted a multi-week program called Whole Health Action Management at BGSU Firelands. It's a nationally recognized peer support program that promotes health and self-management for those living with chronic physical and behavioral challenges.

“We’re trying to change the view of the junkie under the bridge because it really could be anyone,” Emily said. “We're trying to humanize addiction.”

Emily shared her stories with classmates while enrolled at BGSU Firelands, offering an inside look at the personal cost of addiction. Michael continues to talk to classmates about his recovery, with the goal of changing the narrative about addiction and mental health. For both, the chance to help others happens anywhere, whether that be in a classroom, at a community event, or one-on-one.

Their paths to substance use disorder, commonly referred to as SUD, started in different places. But together, Emily and Michael achieved a life in recovery and want to help others do the same.

Emily grew up in Brunswick, Ohio, a city between Cleveland and Akron. She describes her childhood as difficult, noting there was abuse and neglect as both her parents battled mental health issues and substance use disorder themselves.

Seeing the world through that lens gave her a unique perspective as a child entering elementary school.

“When I was asked what I wanted to be when I grew up, I said ‘K-9 officer,’ because I wanted to arrest my parents and get them the help they needed,” Emily said.

Emily endured more struggles as she grew up. At 15, she was diagnosed with leukemia. Years later, after battling her own addiction issues, she found herself in the Ottawa County jail in Port Clinton, Ohio. That’s when she met a BGSU Firelands instructor, the late Mary Beth Wade-Jones.

“She came to the jail to visit us and talk about recovery,” Emily said. “She shared her story with me and kept saying that I should go to college and get an education. I agreed, if she would help make sure I wasn't alone.”

Wade-Jones was also a counselor with Bayshore Counseling, a service in Sandusky. She became Emily’s mentor and served as a source of support and encouragement. Emily enrolled in the criminal justice program at BGSU Firelands with the goal of helping others as Wade-Jones helped her.

Wade-Jones inspired Emily to get involved in the support groups at the Sandusky Artisans Recovery Center. Emily also helps with the Erie County drug court — a program that gives people with drug-related criminal charges a chance to enter recovery and shorten their sentences.

Wade-Jones died in 2018 after a lengthy illness, leaving Emily with doubts about the future.

“That was hard when she passed,” Emily said. “I would pray to her, saying: ‘You got me into this. Be here with me.’”

McGinley welcomed Emily’s drive to share her story in class, which offered students a detailed look at substance use disorder, recovery, and how they relate to the criminal justice system.

“Emily was a great student and has a wealth of information to share,” McGinley said. “She is dedicated and open. Her story gave other students an opportunity to learn and realize that people can change and deserve second chances.”

Emily earned an Associate of Applied Science in criminal justice with highest distinction from BGSU Firelands in 2021. She has completed her bachelor's degree program as well. 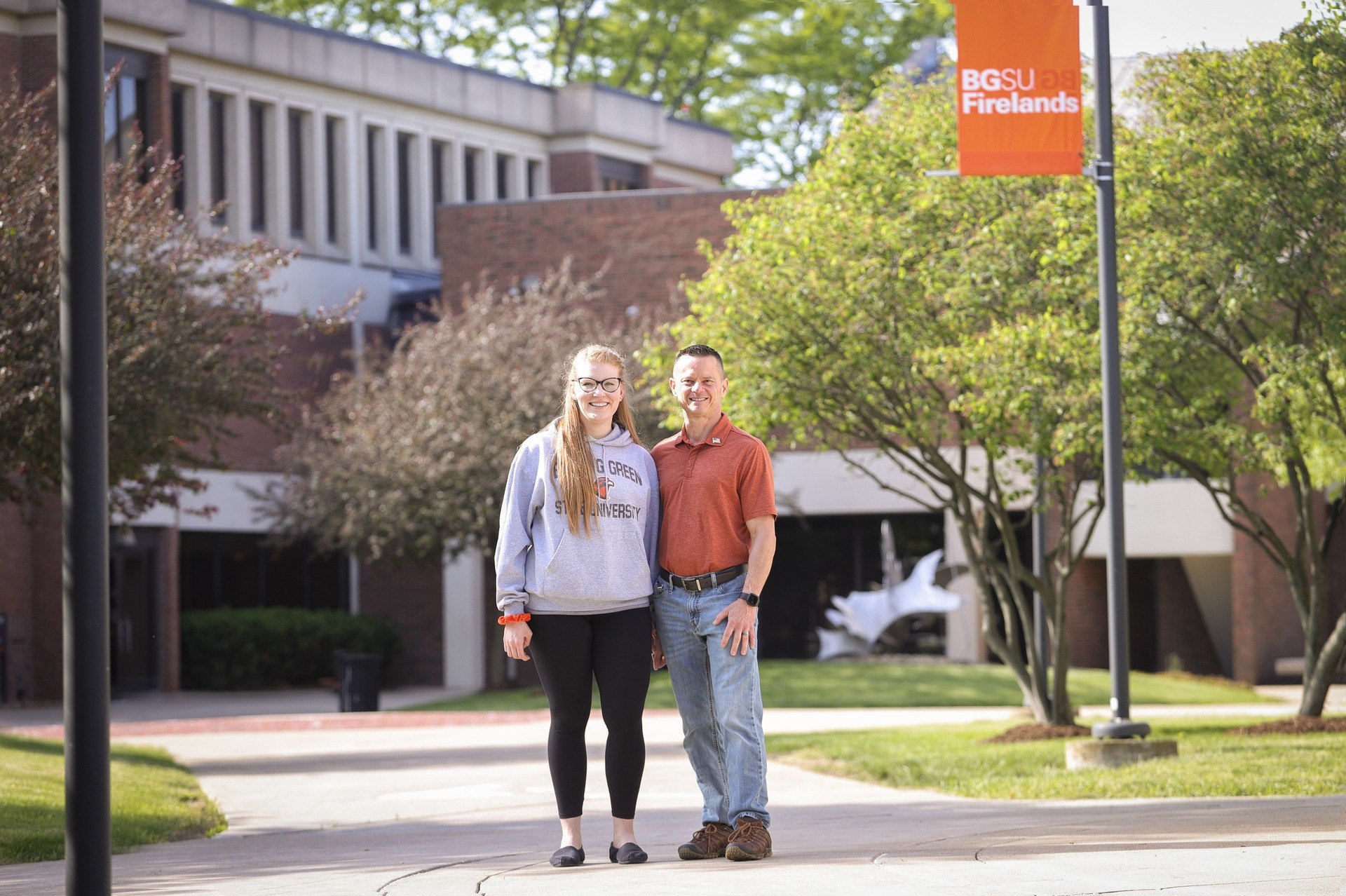 Emily and Michael Werner walk in the BGSU Firelands courtyard in Huron, Ohio.

Michael Werner grew up in Parma, Ohio, a suburb of Cleveland, with three siblings. His childhood included plenty of sports and time at the local community pool. His father taught him to how to sail on Lake Erie. His mother’s involvement in a local dance studio led to him studying tap dance, gymnastics, jazz and ballet.

“I had a perfect childhood,” Michael said.

At 14, Michael earned a full scholarship to study ballet with the San Jose Cleveland Ballet, however, when he was 18 he lost interest in the arts after being involved in a car accident.

Michael struggled to find his ideal career after high school. In 2006, he enlisted in the U.S. Army and served as part of Operation Iraqi Freedom and achieved the rank of sergeant. He was honorably discharged in 2014.

“I endured many traumatic events that had a profound effect on my mental health,” Michael said. “Upon returning from my second and final combat tour in Iraq, I realized I wasn’t reintegrating well into what the U.S. Army calls ‘normal’ life outside of a combat zone.”

“The doctors continued to prescribe handfuls of medication that I was told would help,” he said. “I came to find out some of the medications were highly addictive, including opiate painkillers and benzodiazepines.”

Michael said he also was prescribed a slew of sleeping medications, anti-psychotics, anti-depressants and more.

Michael and Emily met through a mutual acquaintance while both were in active addiction.

“He would go to jail, and we would go back to using together when he got out,” Emily said. “We would think about getting clean, but when one of us was ready, the other wasn’t.”

Emily had never been to jail previously. That changed after she was convicted for theft.

“At the time, I couldn’t comprehend not being able to go home,” Emily said. “I think I spent the first two weeks crying.”

That’s when Emily met Wade-Jones, and the journey to recovery began for both her and Michael. The couple shares the same date of sobriety: Dec. 20, 2016.

Eventually, they enrolled at BGSU Firelands — Emily in criminal justice and Michael in communication — and found the right fit to earn a degree and make a difference in the addiction recovery movement. 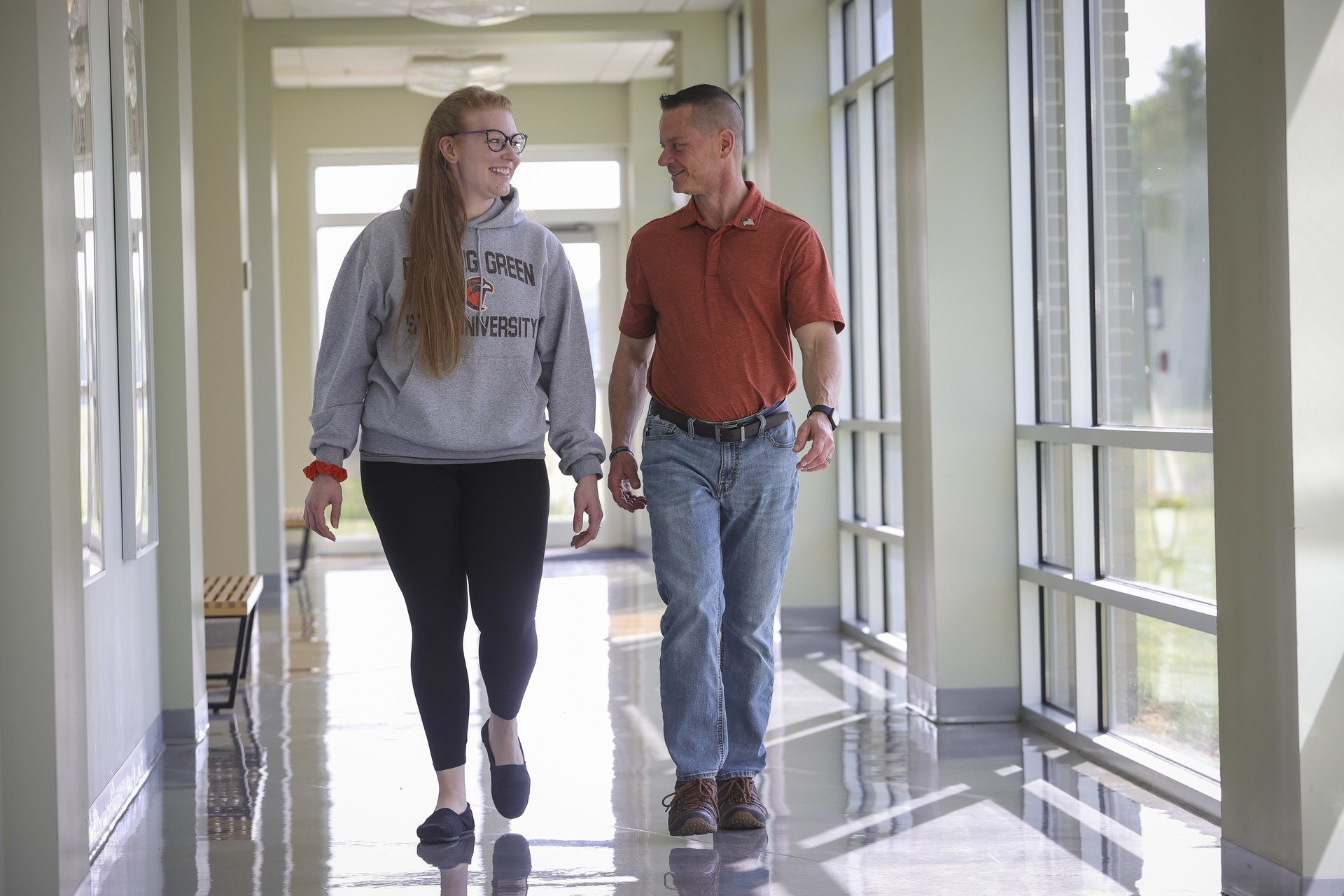 “Being in my late 40s and recovering from severe PTSD, I needed somewhere close to home where I could comfortably attend classes and get one-on-one assistance,” Michael said. “BGSU Firelands is the perfect fit.”

“I wouldn’t be here without the Sandusky Artisans, Mary Beth Wade-Jones and Tracy McGinley,” Emily said. “Tracy was fantastic at helping me navigate college. I tend to overthink, but she always took the time to explain things and talk to her students. She gets engaged and is always willing to listen.”