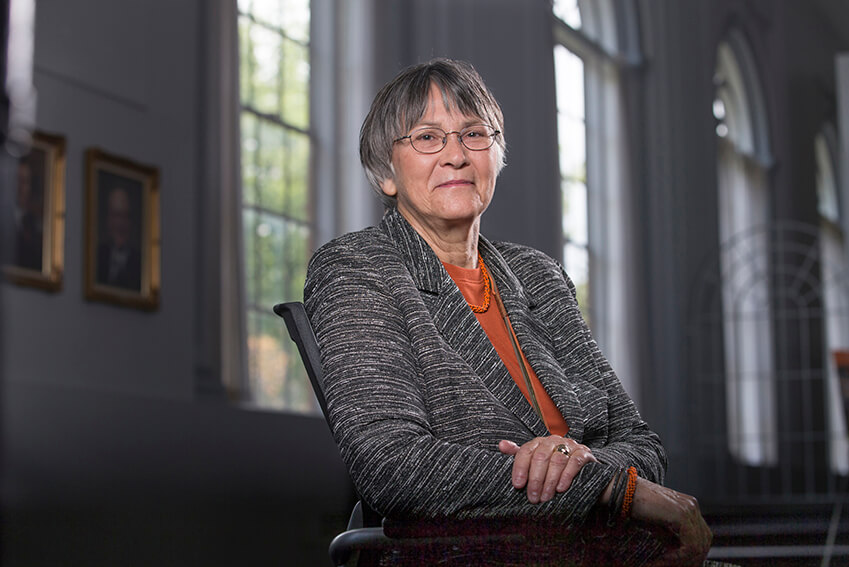 Hollis, an international criminal prosecutor and human rights expert, was presented with the award during the association’s 2018 Annual Meeting on Oct. 28. The AASCU's Distinguished Alumnus Award is presented to an individual who has achieved acclaim in her or his field and who has made a significant contribution to the public, intellectual or cultural life of the nation. Through this award, AASCU directs national attention to the value of society's investment in America's state colleges and universities.

"BGSU is so proud that Dr. Brenda Hollis has been selected for AASCU's 2018 Distinguished Alumnus Award," said BGSU President Rodney K. Rogers. "She's had a significant impact on the public through her service in the U.S. Air Force and as lead prosecutor in several historic war crime cases. Her legal work has shaped the global political stage for generations."

Hollis earned her bachelor’s degree in liberal arts in 1968 from BGSU, where she was an outstanding student and athlete. Her interests ranged from political science and history to philosophy and sociology, and she was a member of the Pi Sigma Alpha honors society. She was also a top scorer and standout athlete in several pre-Title IX women’s intercollegiate sports, including hockey, softball and basketball.

In 1998, Hollis retired with the rank of colonel from the U.S. Air Force after 22 years of service. She also served in the Peace Corps in West Africa and holds a juris doctor from the University of Denver School of Law.

Most recently, Hollis was appointed prosecutor of the Residual Special Court for Sierra Leone in January 2014 by the secretary general of the United Nations, and she also serves as the reserve international co-prosecutor of the Extraordinary Chambers in the Courts of Cambodia. In her work with the special court, she led the prosecution of former Liberian President Charles Taylor.

From 2001 to 2007, she worked as an expert legal consultant on international law and criminal procedure. During this period, she trained judges, prosecutors and investigators at courts and international tribunals in Indonesia, Iraq and Cambodia. She also assisted victims of international crimes in the Democratic Republic of Congo and in Colombia.

Hollis previously worked as investigative team legal officer, legal coordinator and senior trial attorney at the International Criminal Tribunal for the Former Yugoslavia (ICTY) from 1994 to 2001, where she served as lead counsel in a number of historic prosecutions. She led the reopening of the case in which rape was charged as torture, and was lead counsel in the preparation of the case against former Serbian President Slobodan Milosevic until her departure from the ICTY.

Among her other honors, Hollis was inducted into the Ohio Women’s Hall of Fame in 2011, and she was named among BGSU’s 100 Most Prominent alumni in recognition of the University’s centennial celebration in 2010.