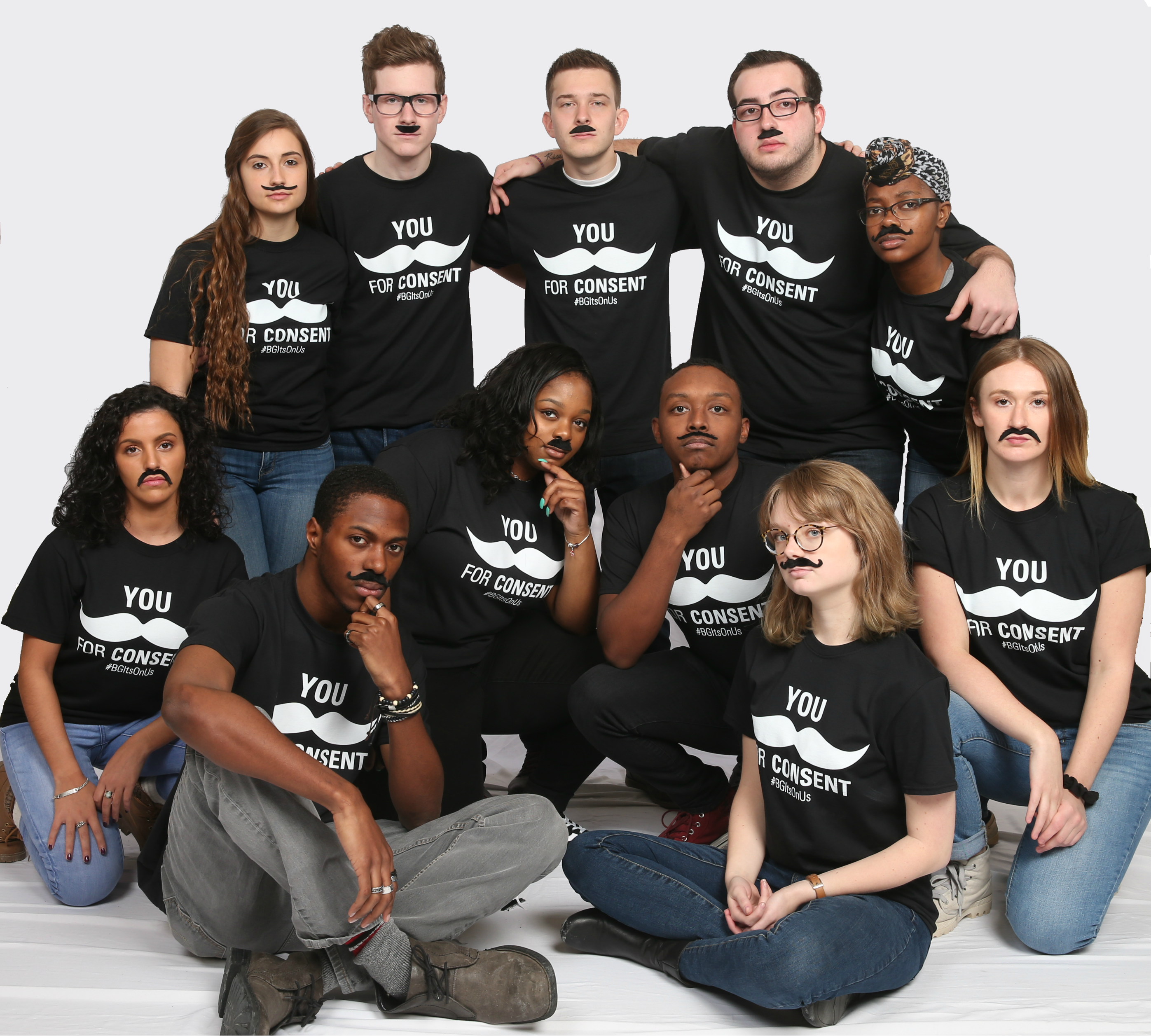 You Mustache for Consent

Whether you are in a serious relationship, dating casually, or just hooking up, making sure your intimate relationships are healthy is important. Although communication is essential in any relationship, one other area is also crucial: CONSENT. It is absolutely critical to have verbal, expressed consent at every phase of intimate contact.

It's on all of us to stop sexual assault

At BGSU, we hope to create an environment where such behavior is unacceptable and cannot exist. The Office of Residence Life also plays an important role in stopping sexual assault on our campus. As such, the office has been, and will continue to engage in several pro-active initiatives. These initiatives are outlined as follows:

The Mustache (must ask) Campaign

The sexual assault awareness campaign, You Mustache For Consent will be rolling out on Friday, Feb. 23, in collaboration with the Office of Residence Life and the Wellness Connection, to educate the University about the importance of asking for consent and what consent means. A series of communication pieces will be utilized to promote this critical and important topic as well as various programs and presentations for students to participate in.

Get Involved & Spread the word 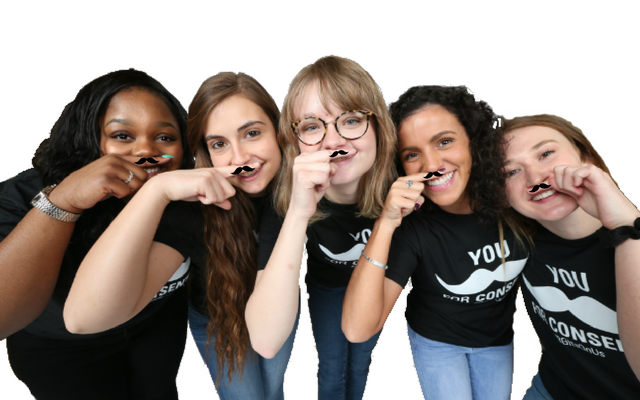 Show your support in preventing sexual assault on campus by using the hashtag #BGitsOnUs. Make your snap, tweet or post stand out by taking a selfie and adding a mustache. 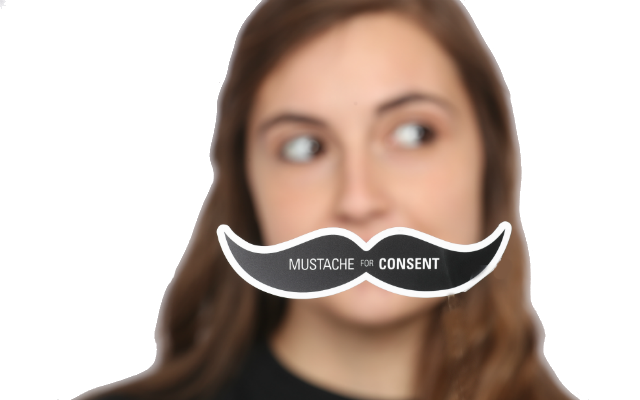 Have you found a mustache on a mirror? If so, snap a selfie and send it to your friends. Doing so shows your support and reminds people of the importance of asking for consent. 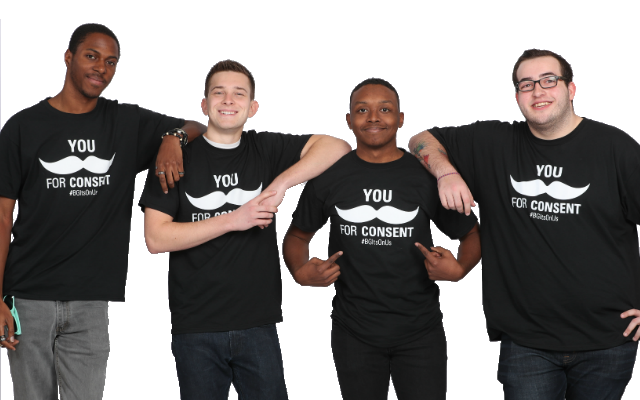 Attend an event that the Office of Residence Life is hosting (listed below) or check out the official calendar of events which includes all of the awareness events across campus.

The University defines consent as 'Giving permission ofor something to happen must be given freely. Consent must be given in order for the sexual contact/conduct to be considered legal. Silence does not equal consent. Consent also means the person is of legal age and has no mental limitations.'

This means that an individual cannot give consent when:

Feb. 15 - 27 | Informed-U brings students to the table for real conversations about how they can address sexual violence and misconduct on campus. During participant-led, in-person learning sessions, students share experiences and beliefs, internalize key concepts, collaborate around strategies and develop action plans for change. Students living on or off campus can attend any of the following sessions:

Feb. 20 - 28 | Four residence halls will be hosting the Wellness Connections Peer Facilitators for a program entitled “Did You Ask.” The program covers topics on consent, bystander intervention and Title IX. Students living on or off campus can attend any of the following sessions:

April 2, 2018 | The Sex & Drugs Show is a 90-minute, multi-issue program that covers the basics of substance abuse, sexual communication and sexual assault. During this interactive program, students will have the opportunity to discuss types of drinking behavior, the effect of substance abuse on academic performance, what happens when alcohol and sexual communication collide and the difficult subject of sexual assault. Learn more>>

What Were You Wearing?

April 11, 2018 | In honor of National Sexual Assault Awareness Month, BGSU’s It’s on Us committee and The Cocoon are co-sponsoring “What Were You Wearing?” An exhibit by sexual assault survivors to challenge victim-blaming statements. The exhibit will be held from 10 a.m. to 5 p.m. on Wed. April 11 in BTSU Rm 208. Please contact Liana Natochy at lianan@bgsu.edu for more information.

April 25, 2018 | The Denim Day campaign takes place on a Wednesday in April in honor of Sexual Violence Awareness Month. The campaign was originally triggered by a ruling by the Italian Supreme Court where a rape conviction was overturned because the justices felt that since the victim was wearing tight jeans she must have helped her rapist remove her jeans, thereby implying consent. The following day, the women in the Italian Parliament came to work wearing jeans in solidarity with the victim. Peace Over Violence developed the Denim Day campaign in response to this case and the activism surrounding it. Since then, wearing jeans on Denim Day has become a symbol of protest against erroneous and destructive attitudes about sexual assault. In this rape prevention education campaign, we ask community members, faculty, staff and students to make a social statement with their fashion by wearing jeans on this day as a visible means of protest against the misconceptions that surround sexual assault.

No matter what time of year it is, campaign or no campaign, we want students to be aware of campus resources and community resources that are always available to them. We hope that this information is useful for anyone who is, or who knows of, a survivor.