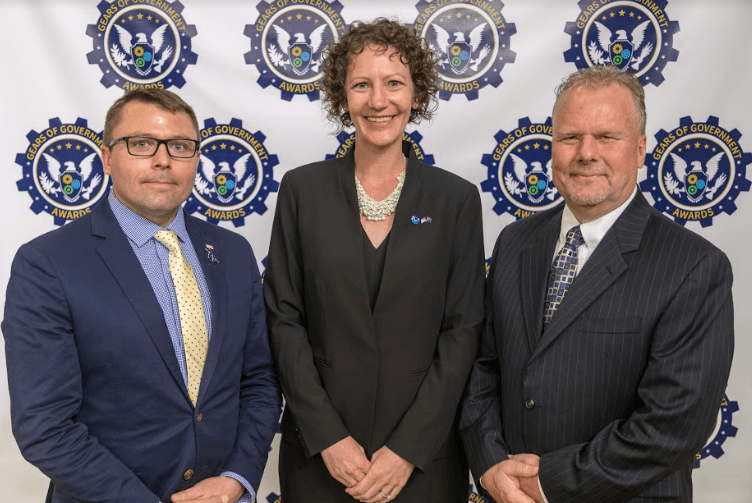 The President’s Awards recognize the best of the best. They are the highest level of distinction within the Gears of Government Awards program, with awardees selected from more than 200 teams and individuals already recognized by their agencies for outstanding mission results, customer service and accountable stewardship.

The awards ceremony took place in the South Court Auditorium of the Eisenhower Executive Office Building.

Davis and two other scientists, Drs. Gregory Doucette and Stephanie Moore, are being recognized for their work with members of the National Oceanic and Atmospheric Administration (NOAA), a division of the U.S. Department of Commerce. The scientists deployed robotic Environmental Sample Processors (ESPs) for the first time, transmitting near-real-time measurements of toxins in Lake Erie and off the coast of Washington state.

“The work I have done so far at Bowling Green State University is expanding upon that work, getting Ohio citizens involved with measuring toxins in Lake Erie and continuing to develop low-coast technologies that measure toxins in the lake,” Davis said. “Even though the award is for the work I was doing in the government, that work is continuing here with my position at BGSU.”

ESPs now are used to ensure delivery of safe drinking water from Lake Erie and access to safe seafood in Washington. Applications elsewhere are now coming online. This cutting-edge technology markedly advances the protection of economic and public health in U.S. coastal communities.

NOAA scientists joined forces to proactively develop and deploy two ESPs: one upstream of a drinking water intake in Lake Erie and the other near an open-ocean harmful algal bloom “hot spot” near Washington. They developed, validated and implemented novel and reliable sensors for the processor that are capable of remotely detecting algal toxins at parts-per-trillion levels. The scientists procured and deployed the robotic platforms and engineered moorings for near-real-time data analysis and transmission from shallow lake and deep ocean sites.

Davis, who has worked at BGSU since August 2017, is a key member of the research team for the Great Lakes Center for Fresh Waters and Human Health. The center, which was founded with a $5.2 million federal grant, is energizing and expanding research on HABs that pose a threat to the health of humans and wildlife. In 2014, toxins from an algal bloom contaminated Toledo’s water supply and highlighted the urgency to study this problem.

"Timothy Davis being recognized for his work with NOAA speaks to the importance of protecting our Great Lakes and coastal waters from the threats posed by harmful algal blooms," BGSU President Rodney K. Rogers said. “As a public university, we have an obligation to create public good. BGSU continues to lead research efforts that impact communities in our own backyard and across the nation."

The deployments were the first ever to report toxin levels at surface and drinking water intake depths in near-real-time, ensuring safe drinking water for millions of customers and preventing the loss of millions of dollars due to water supply shutdowns. The deployments enabled the first near-real-time monitoring of the offshore sources of toxins that contaminate wild and farmed shellfish on the Washington coast. In 2017, these data contributed to an increase in the daily catch of razor clams, injecting more than $5.3 million into the local economy.

“This award shows that our federal and state leaders know the importance of protecting our coastal and inland waters, the Great Lakes, from these events that are becoming more common and will continue to be as climate change occurs,” Davis said. “We want to make sure these events don’t get overlooked because we don’t want another Toledo water crisis to happen again anywhere in the United States.

“We want to ensure that these events happen less frequently, and while we’re working toward long-term solutions we want to have the best technology in place to protect human health ant to serve the public to the best of our ability. That’s really important from a public university standpoint.”

The success of this effort positions toxin sensors to provide adaptive and intelligent operations within fixed mooring stations and fleets of autonomous underwater vehicles. The long-term impact of expanding and mobilizing these smart sensors accelerates the Department of Commerce’s strategy to advance sophisticated ocean and coastal intelligence that strengthens resilience of communities.