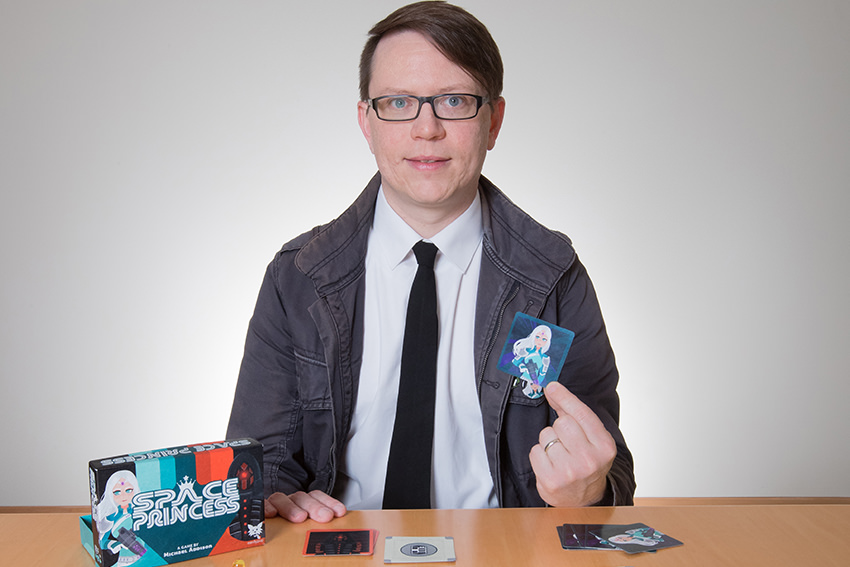 While his “elegant strategy game for two” involves a lot of decisions, it wasn’t hard for Bowling Green State University Applications Developer Mike Addison to decide to make a board game in support of bipolar awareness. Inspired by Carrie Fisher, Space Princess is fully funded on Indiegogo, with a portion of each pledge going to the International Bipolar Foundation (IBDF).

“Carrie Fisher meant a lot to me as a hero,” said Addison, a 1999 BGSU alumnus. “She was representative of my childhood. My way of processing my feelings about her death was to design a game. We are releasing it to honor her memory and inspire new heroes to follow in her footsteps.”

Not only did Fisher, who had bipolar disorder, support bipolar awareness and the IBPF, members of the Space Princess team, including Addison, have family members who have struggled with bipolar disorder.

“Carrie Fisher was and still is very relevant to a lot of things our society is struggling with,” Addison said. “She was a strong woman in genre fiction in the ‘70s, which was rare. It is important that women and girls, as well as men, have good female role models.”

Although this is the first game Addison has published, he has been designing games for about 10 years as a hobby. He started working on Space Princess in December 2016, and continued on and off through 2017.

“Along the line, I realized I actually had a pretty well self-contained game I could share with other people and do some good,” he said.

The game was play-tested and then Addison brought in an illustrator, Rachel Kozy, and a graphic designer, Ian Moss, to finish the game in January.

“I’ve very proud of how it came out,” Addison said. “The artwork and design bridge the strategy and game-play elements and imagination of the player.”

Participants can play this pocket-sized game as the Space Princess, using wits, holograms and a trusty blaster to evade the forces of evil and escape the star cruiser, or they can play as the Dark Zealot, controlling troopers and sinister powers to trap the Space Princess before she escapes.

Addison said the game plays very quickly, but is challenging, featuring a lot of choices along the way.

“As you get closer to an ending, every decision counts,” he said. “But players will feel engaged throughout the whole game.”

Addison said Space Princess is similar to chess or Stratego. More experienced game players might compare it to Onitama, The Duke or Burgle Bros.

“It doesn’t have a lot of complicated math or rules,” Addison said. “The rules are simple, elegant.”

Addison started playing Dungeons and Dragons when he was 12. He said one of the great things about that game is that it invites players to be creative, which got him interested in designing games. Some of his favorite games are Pandemic and Ghost Stories.

Like many popular board games today, Space Princess has room for expansions.

“Expansions are possible and we would like to reach a larger audience,” Addison said, adding that the game’s success on Indiegogo is social proof that they have something with this game. “Originally, we wanted to create something that wasn’t too big of an ask, that made people feel good about supporting the cause and feel they were getting something good in return.”

Space Princess fits a specific niche in the board game industry, being a quick, two-player game that can fit in your pocket. BoardGameGeek, an online board gaming resource and community, highlighted the game earlier this month.

About 5.7 million American adults, or about 2.6 percent of the population, age 18 and older in any given year have bipolar disorder. Bipolar disorder typically develops in late adolescence or early adulthood. However, some people have their first symptoms during childhood, and some develop them late in life. It is often not recognized as an illness, and people may suffer for years before it is properly diagnosed and treated.