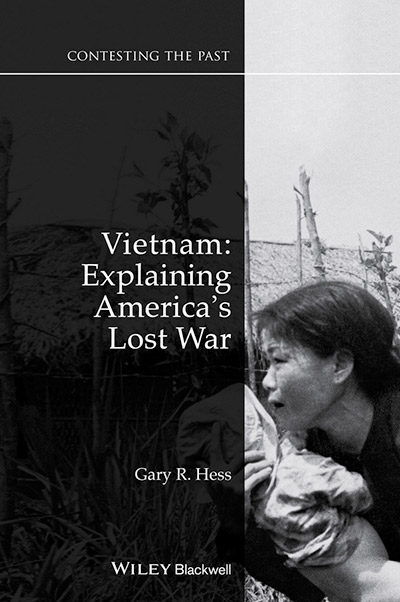 July 28, 2015, marks 50 years since President Lyndon Johnson announced that he was committing the United States to an open-ended war to save South Vietnam from  a communist takeover.  Although it was made in a low-key manner during a routine, midday press conference, the portentousness of the announcement was not lost on anyone there, said Dr. Gary Hess, Distinguished Research Professor Emeritus of History.  “Everybody understood that this was serious.”

Hess has recently completed a second edition of his award-winning “Vietnam: Explaining America’s Lost War,” first published in 2008 by Wiley Blackwell as part of its “Contesting the Past” series. The revised and updated 2015 edition contains additional material in the chapters and an entirely new conclusion, designed to be more useful to readers than the original.

“A lot has been written about the war in the half-dozen years since the book first came out that has broadened our understanding about how historians interpret the war,” Hess said. The new conclusion examines the competing lessons of the war as interpreted by military leaders, political scientists, policy makers, journalists and others, and the ways in which those interpretations of the war have influenced national security policy over the last 40 years.

“Those lessons are really still with us,” Hess said, “and have provided the guiding principles upon which leaders make decisions for war. Even though it’s a very different world today, Vietnam is always there in the consciousness of American leaders who are influenced buy its lessons.”

However, those lessons are far from agreed upon, Hess said. Within the two main camps of thinking about why Vietnam was such a disastrous conflict there is great controversy. The first, perhaps prevailing, belief is that the war was not winnable and should never have been engaged in. The other camp thinks it was winnable, had the U.S. pursued a different strategy. Among those who subscribe to the “winnable” theory, some feel the mistake lay in not winning the “hearts and minds” of the South Vietnamese. Others believe the fault was in insufficient commitment of resources, and not going in “full throttle,” Hess explained.

Praised by critics and academics for its breadth and clarity, “Vietnam: Explaining America’s Lost War” examines seven key issues: the necessity of “holding” South Vietnam, the reasons Johnson took the nation to war, the bombing of North Vietnam, media coverage of the war, the Tet Offensive of 1968, and President Richard Nixon’s pursuit of “peace with honor.”

Hess examines the central arguments and their supporting evidence on both sides of the table about these issues, along with key debates such as whether the war really was necessary for U.S. security and whether negotiation would have been a feasible alternative to war.

The war has been a great source of internal conflict for the U.S. since its very beginning, Hess said. Even the manner in which Johnson made the announcement, downplaying its significance, bespoke his doubts about entering into a war that would endanger the ambitious new domestic policy he was championing, his Great Society. “He was reluctant to go to war but he felt he had to do it,” Hess said. “By that summer it was obvious South Vietnam was coming apart and couldn’t survive against the Vietcong and North Vietnamese.”

Perhaps the one agreed-upon rallying cry in the intervening years has been “No more Vietnams,” Hess said. In sheer numbers, the nearly 58,000 American lives lost in that conflict are more than five times the total lost in conflicts since the Persian Gulf War. Readers of “Vietnam: Explaining America’s Lost War” will have a solid basis upon which to draw their own conclusions about how to best prevent such a calamity from happening again.