BOWLING GREEN, O.—Dr. Ronald Scherer, a Bowling Green State University professor of communication sciences and disorders, has earned an international reputation for his pioneering work on the aerodynamic and acoustics of the human vocal tract. 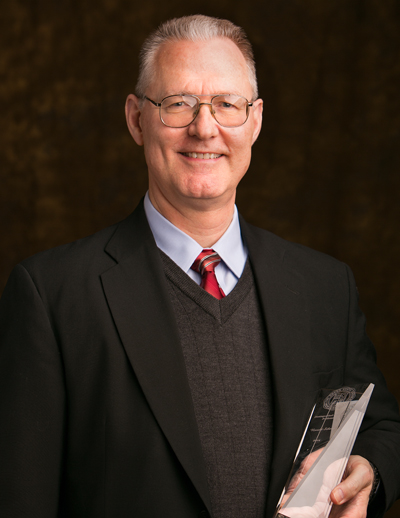 In recognition of his body of work and accomplishments, BGSU has named him a Distinguished Research Professor. Established in 1982 by the board of trustees, the title is conferred upon faculty members who hold the rank of professor and who have established outstanding national and international recognition through research and publication in their disciplines.

Scherer was honored at the Faculty Excellence Awards April 16.

With more than 145 publications, two books and an active research agenda, Scherer has worked tirelessly to increase the body of knowledge on the formation of the voice and to translate that knowledge into clinical practice, in the service both of professional voice performers as well as people with vocal problems.

Scherer’s research has been supported by millions of dollars in National Institutes for Health funding, including $5 million since coming to BGSU. His “painstaking work on quantifying the geometries of the human larynx has led to an entirely new way of thinking about aerodynamics in speaking and singing,” wrote Dr. Ingo Titze, executive director of the National Center for Voice and Speech. “The most important discovery was the pressure-flow relation for a divergent glottis, which he demonstrated to be highly dependent on jet formation and turbulence at exit. This discovery has now led to a better understanding of voice quality, self-sustained vocal fold oscillation and naturalness in speech simulation.”

Voice quality is “an essential element of improving communication effectiveness and quality of life for people with disordered voices,” said Dr. Nancy Pearl Solomon of Water Reed National Military Medical Center, who was among his nominators for a fellowship in the American Speech-Language-Hearing Association. According to Solomon, in addition to being an internationally recognized scholar, Scherer is a “generous and vigorous service volunteer and masterful teacher and mentor.”

Another of his admiring peers, Dr. Johann Sundberg, a professor of music acoustics at Stockholm University, called him “an ideal model for students and colleagues.”

Scherer has also been cited for his “pioneering work” and named a fellow by the Acoustical Society of America and the International Society of Phonetic Sciences, and has been asked to contribute two chapters to the Oxford Handbook of Voice Studies — “further evidence of his eminence and influence in his specialty,” Hewitt said.

He is also much valued as a journal article reviewer, since his reviews are invariably insightful and helpful, said Dr. Robert Thayer Sataloff, chair of the Department of Otolaryngology at Drexel University and editor of the Journal of Voice, where Scherer is also on the editorial board.

Among his extensive professional service, he holds leadership roles in The Voice Foundation and is on the international committee for World Voice Day.

Scherer received his Ph.D. in speech science from the University of Iowa, in 1981. In addition to his BGSU position, since 2012 he has been a Distinguished Professor of Voice Science at the Southern Institute for Performing Voice.