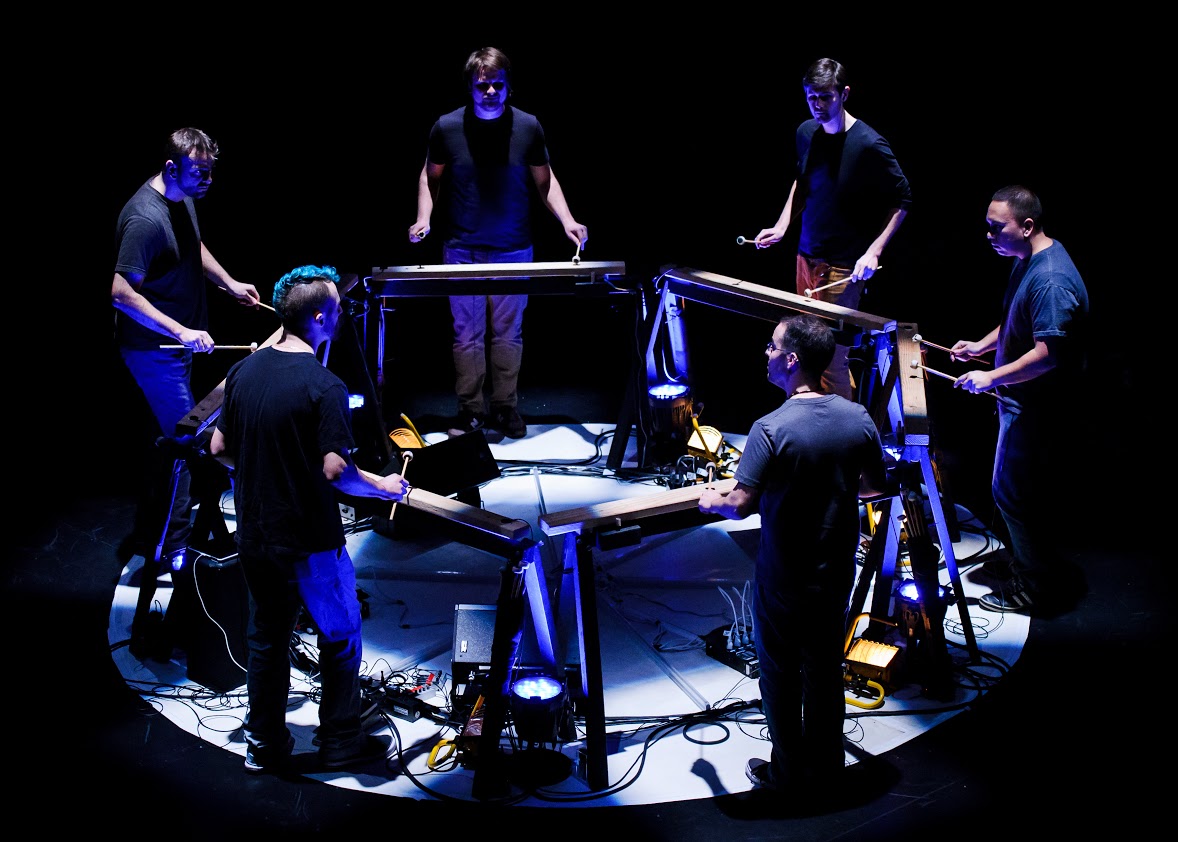 BOWLING GREEN, O. – Percussion sextet Mantra Percussion returns to BGSU for a concert on Monday, February 19 at 8 p.m. in Kobacker Hall at the Moore Musical Arts Center as part of the Music at the Forefront concert series sponsored by the MidAmerican Center for Contemporary Music. The concert is free and open to the public.

Committed to honoring the past and expanding the future of percussion music, Mantra Percussion brings to life new works for percussion by living composers, collaborates with artists from diverse genres and styles, and questions what it means to communicate music with percussion instruments. Mantra Percussion engages new audiences by challenging the standard concert format through evening-length events that look toward a grander artistic vision.

After co-commissioning Michael Gordon's evening-length percussion sextet Timber, they gave the work's United States premiere in October 2011 at BGSU and subsequently toured the work internationally. Mantra Percussion also gave the New York premiere of Timber at the Brooklyn Academy of Music's Next Wave Festival in December 2012.

Over the past eight years Mantra Percussion has commissioned and/or premiered over 40 new works for percussion ensemble.

Mantra Percussion has been hailed by The New York Times as "finely polished...a fresh source of energy" and by TimeOut New York as "forward thinking"; the group was praised by The New Yorker and TimeOut New York for presenting one of the ten best classical performances of 2012. They recorded one of Time Out New York's Ten Best Classical Albums of 2011 -- Aaron Siegel's Science Is Only A Sometimes Friend on Lockstep Records, Michael Fiday's Hands On! on Innova Records, and in 2016 they released a double-CD album, Timber Remixed/Timber Live, on Cantaloupe Music with 12 remixes of Michael Gordon's Timber by some of the leading electronica artists today including Squarepusher, Jóhann Jóhannsson, Tim Hecker, Fennesz, Oneohtrix Point Never, Hauschka and more.

Mantra will perform new works by Aaron Siegel, Lesley Flanigan, Tristan Perich, and Michael Fiday; who will be visiting as well.

Music at the Forefront is an annual concert series featuring performances by accomplished and innovative performers of contemporary music. For more information contact Kurt Doles at the MidAmerican Center for Contemporary Music (419/372-2685 – kdoles@bgsu.edu).