Rawhide is an American Western television series that aired for eight seasons on the CBS network from January 9, 1959, to January 4, 1966 for a total of 217 black-and-white episodes. As the sixth-longest running television Western, the series was produced by Charles Marquis Warren, who also produced early episodes of Gunsmoke.

Rawhide is set in the 1860s and dramatizes the challenges faced by the drovers of a cattle drive. Eric Fleming portrayed Gil Favor, the tough trail boss to his younger counter-part Rowdy Yates, portrayed by Clint Eastwood.  After the end of the show’s 1964-1965 season, Fleming left the series to appear in films.  In 1966, he tragically drowned while shooting on location in Peru.

These items were collected by Carol Muir, a fan of the television series.  Of special note is the scrapbook created by Muir, which contains multiple articles on the death of Fleming, and many photographs of him on the set of Rawhide. 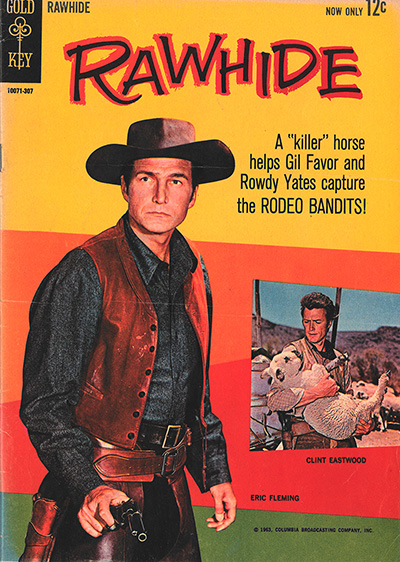 Several Rawhide comic books and DVDs of Rawhide episodes that came with this donation were transferred to the BPCL’s main holdings of those collections.  They can be located by searching the library catalog.