Games are strongly tied to popular culture, as they have been a part of nearly every society in history. Due to their ubiquitous nature, games have the ability to act as cultural artifacts, revealing much about the values, interests, and anxieties of a culture through the objectives and themes of the games it played. For instance, the boom in the production and popularity of games in American culture during the 20th and 21st centuries speaks to, among other things, the increase in the amount of leisure time that many Americans enjoy.  What Americans do with this time says much about our cultural values and ideals. The predominance and popularity of capitalism games such as Monopoly show that even at play, money was and is very much on the minds of many Americans. 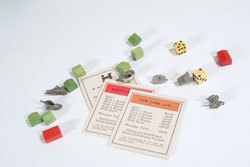 In addition to serving as cultural artifacts, modern games represent an enlightening intersection between folk and mass culture, two key divisions within popular culture. Many games such as checkers, chess, and various card games are traditional, meaning they have developed over a period of time (in some cases many hundreds of years) and have no single inventor. This traditional and historical quality places such games within the realm of folk culture. Over the last 150 years, many companies have sprung up (and folded) within the gaming industry seeking to capitalize on the seemingly innate human desire to play games. While also presenting their own editions of traditional games, these companies also manufacture and create original games, such as the 19th century's Game of Snap and more contemporary creations like Trivial Pursuit and Dungeons and Dragons. As contemporary creations and products of the marketplace, these games fall within the category of mass culture. Many of these theme games, like the Gracie Allen Murder Case and the Transformers Adventure Game (both in the BPCL collection), are also tied to another form of media such as film or television, further linking them with mass culture.

Apart from board games, there are several other varieties of games which are represented in the BPCL collection. These include various types of card games, from those using a traditional 52-card deck to matching games like Old Maid, and role playing games that rely largely on the players to create the world and atmosphere of the game.

A highlight of the board game collection is a first edition of Parker Brothers' Monopoly from 1935. A variety of other games from the 1930s, such as Blondie Goes to Leisureland and The Gracie Allen Murder Case. Additionally, the collection has a variety of role playing games, from Doctor Who to The Adventures of Indiana Jones.

There is also a wide array of material associated with the military strategy game Diplomacy. Set in pre-World War I Europe, Diplomacy was the first commercially published game to be played by mail through fanzines (e.g. dipzines) and newsletters. In addition to a 1999 edition of Diplomacy, the Library is home to the Hoosier Archives, an extensive collection of Diplomacy fanzines, correspondence, and official material of the International Diplomacy Association and their Diplomacy convention.

In addition to the Library's vast collection of standard playing cards, which includes such pieces as a deck commemorating the 1934 Chicago Worlds Fair, the racy "Varga Girls" pinup cards from the 1950s, and Politicards 96 featuring politician caricatures, there is also a large assortment of specialty card games and decks. The specialty game collection ranges from a vintage set of Old Maid (with characters from nursery rhymes and fairy tales) to 1884's Game of Mythology, the oldest game in the whole games collection.

The games in the collection are in various conditions. Some have never been played and their game components are still in the original packaging. Other, typically older, games are somewhat incomplete and worn down, but are still able to offer valuable insights as cultural artifacts.