3. Creation of the Title IX
and Front Line Advisory Groups

11. Reports and Resources
In Student Cases

This report highlights the education, programs, and people connected to Title IX during the 2019-2020 academic year. I began my position as Title IX Coordinator in January of 2020 and did not have much time to execute any goals before our nation was faced with unprecedented challenges from COVID-19. Immediately after transitioning to a virtual environment, our team focused on transitioning all of our procedures and communications to an online platform. We were able to quickly streamline many of our services and continue to provide resources to our staff and students.

In addition to navigating through a pandemic, the Department of Education handed down new Title IX legislation. In May of 2020, we were given three months to be in compliance with major changes to Title IX definitions, policies, and procedures. Again, our office pivoted some of our focus and collaborated with Faculty Senate, Undergraduate Student Government, Graduate Student Senate, Administrative Staff Council, Classified Staff Council, Office of the General Counsel, and the Office of the Dean of Students to create a policy and procedures that aligned with the mission and vision of BGSU.

Through all of this adversity, we maintained our commitment to providing our community with support, education, and awareness. While it remains our hope that you never have to utilize the Title IX process, our team is constantly working to better serve those who do. We have strengthened our partnerships across campus and within the community in order to change the campus culture and open up discussions around sexual assault prevention. The Cocoon and the Center for Violence Prevention and Education offer several opportunities for training and other involvement.

If you have any questions, comments, or concerns, please contact me at titleix@bgsu.edu

*Denotes person only served for one semester

Christopher H. Bullins
Office of the Dean of Students

Dr. Jacob Clemens
Office of the Dean of Students

Brian Heilmeier
Office of the Dean of Students

Lakeshia Dowlen
Office of the Dean of Students

Megan Arnold
Office of the Dean of Students

Stacey Allan
Office of the Dean of Students

Dr. Judy Jackson May
College of Education and Human Development

Creation of the Title IX and Front Line Advisory Groups

On May 1, 2017, former BGSU president Dr. Mary Ellen Mazey appointed a Task Force on Sexual Assault comprised of students, faculty, staff, and a victim advocate to address issues and concerns surrounding sexual assault on our campus.  Dr. Mazey asked the members to review our Title IX and sexual assault policies and procedures, benchmark our efforts against best practices across the country, and provide recommendations to improve our policies, campus culture, and education and prevention efforts. The Task Force completed their work in August 2017 and released a Final Report detailing their recommendations. After review of the recommendations, it was decided that all recommendations would be implemented.

and is now called the Title IX Advisory Committee to assist with Title IX compliance efforts. The Advisory Committee is a group of staff and students that works to provide the University with guidance, evaluate the effectiveness of the current Title IX processes, and look toward the future to identify and deploy new initiatives across the institution with the consideration of the recommendations from the Ohio Department of Higher Education’s Title IX Advisory Group.

Students across campus were invited to take part in the Front Line Advisory Group and serve as liaisons between students and the Office of Title IX. They will be working with the Office to provide their recommendations on a range of issues such as campus culture, training and educational programming, and processes concerns. They will also work to identify emerging issues related to sexual harassment, sexual violence, and relationship violence and contribute to the policy review process. The board will ensure that their presence is known on campus by distributing information through various forms of communication throughout the year. The main focus of the Front Line Advisory Group is ensuring that BGSU students are at the forefront of policies and decisions made within the Office of Title IX.

BGSU AND THE COCOON

BGSU and The Cocoon have a continued partnership to provide advocacy services to students through a sexual violence advocate who has an office on campus. The advocate, who is available 20 hours a week, provides support services to survivors of sexual and domestic violence and is available to listen and offer options, provide support during Title IX-related meetings, and empower survivors through their journey of healing. The services are provided at no cost and are completely confidential. 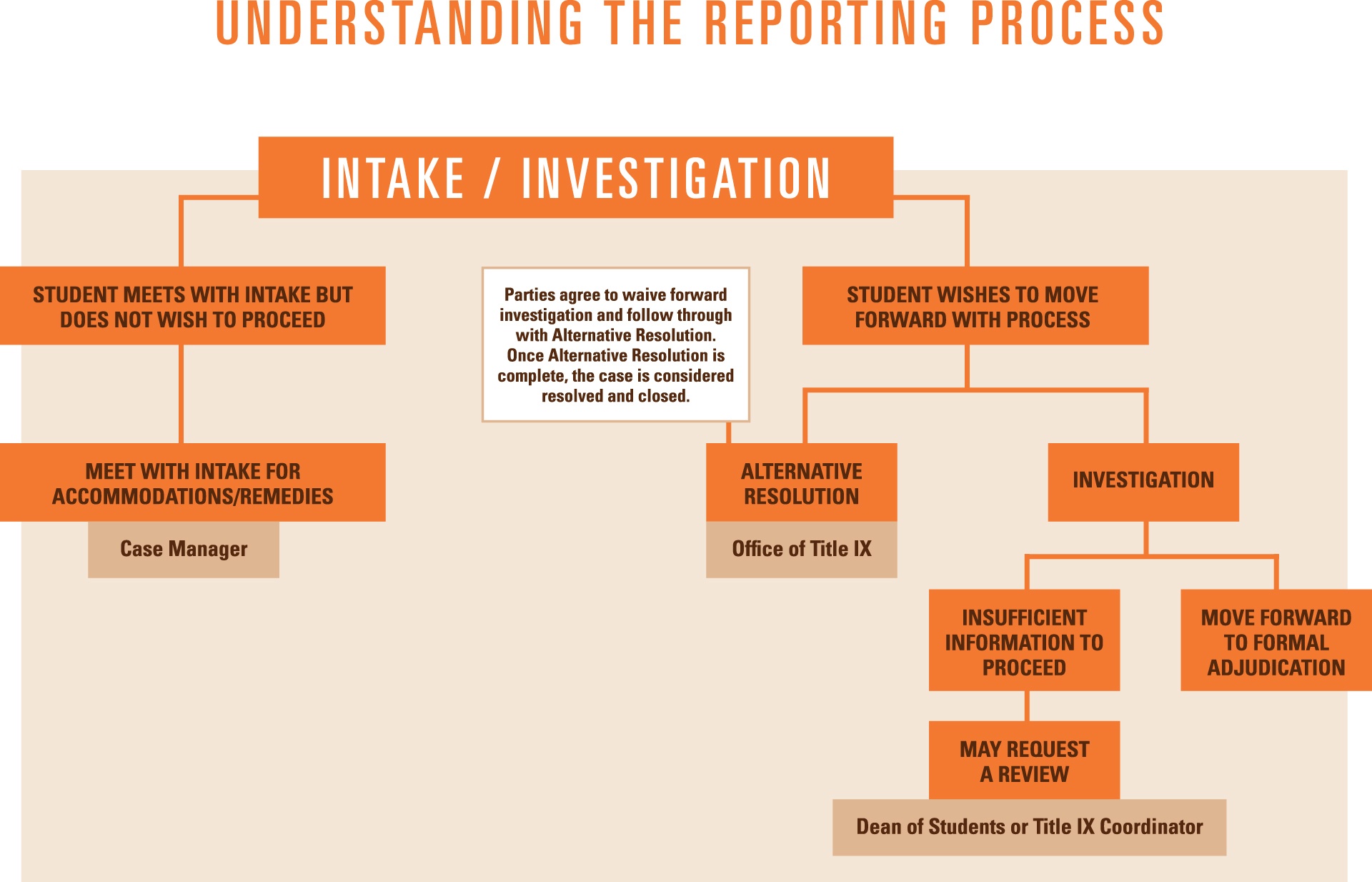 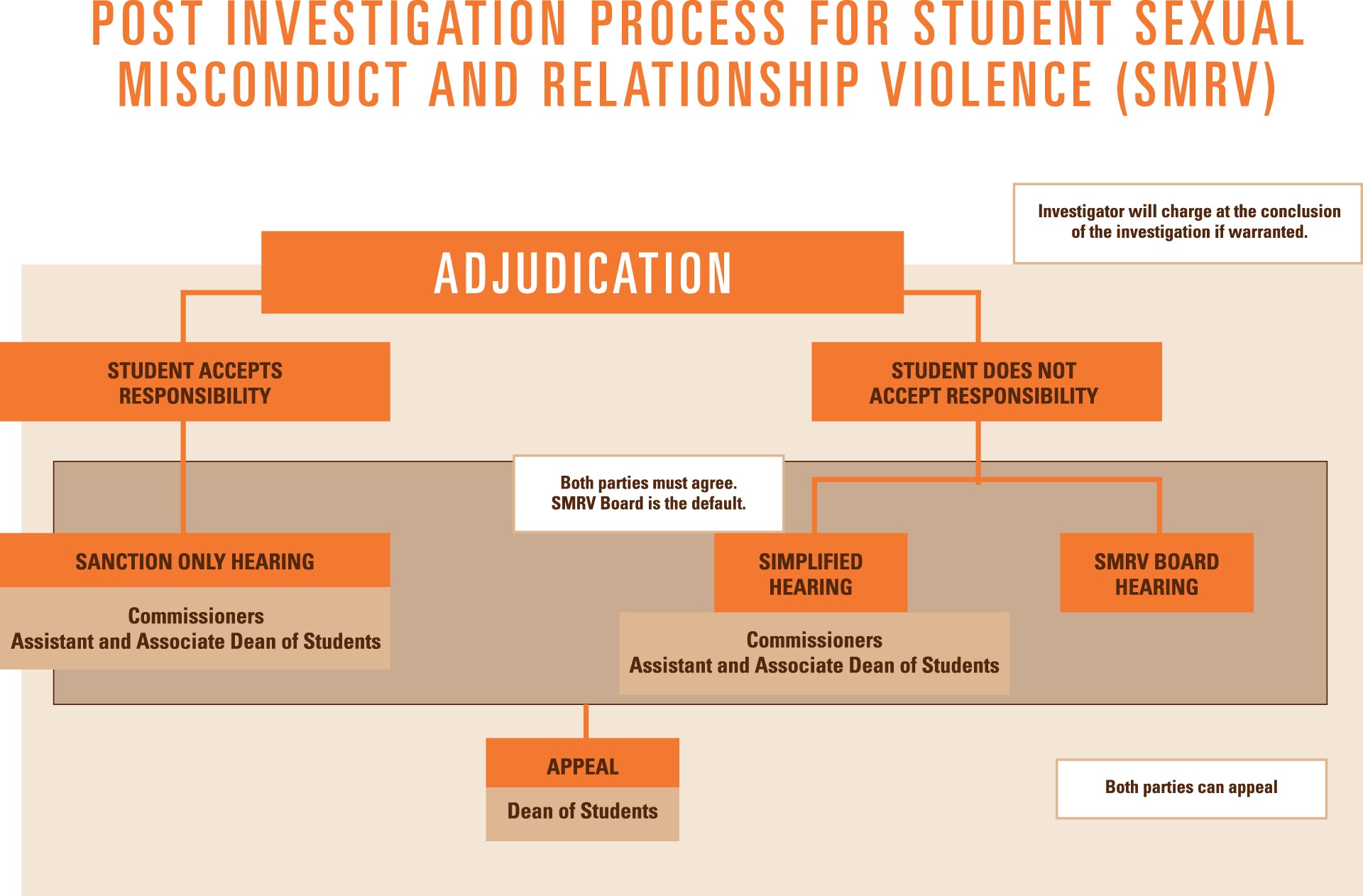 BGSU will take reasonable steps to provide pregnant students the opportunity to continue their education with support from faculty and staff. Reasonable academic accommodations will be made available to the extent practicable without lowering academic standards or requiring substantial program alteration. BGSU will   work to make accommodations available in a timely manner once notified of the need.

This Code of Student Conduct is intended to ensure that students and recognized student organizations conduct themselves in accordance with these values by participating in the University environment, which respects differences of sex, sexual orientation, gender identity, gender expression, race or color, marital status, ethnicity, religion or creed, ancestry, genetic information, pregnancy, national origin, disability, age, and veteran’s status. This Code creates a set of expectations for student conduct, ensures a fair process for determining responsibility when behavior may have deviated from those expectations and provides appropriate sanctions when a student or recognized student organization has violated the Code of Student Conduct. Every effort will be made to balance the needs and rights of the student or recognized student organization with the welfare of the community as a whole.

The following groups and platforms were used to train on various topics connected to Title IX and sexual assault awareness and prevention.

The Office of Human Resources (OHR) provides annual mandatory training to all employees. Additional OHR prevention trainings are available during the year.

EduRisk is an online learning management system that provides trainings. BGSU began its collaboration with EduRisk to provide training in 2016.

A letter jointly signed by the Chief Human Resources Officer and Provost is sent via email to all employees annually in October. The letter identifies that all employees (faculty, administrative and classified) are required to take the mandatory Title IX and Anti-harassment online trainings each year.

BGSU Compliance Day – hosted the seventh annual full-day conference, which is open to the campus and the general public, where we invited subject matter experts from the following agencies:

Reports and Resources in Student Cases

During the investigation process and following the resolution of an SMRV case, BGSU can connect those involved with a variety of resources. These resources include:

Note: The number of reports is not the same as adjudication. Delayed reports have been captured in the year they were reported. 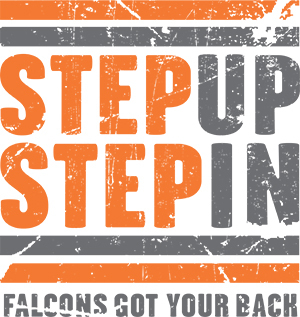 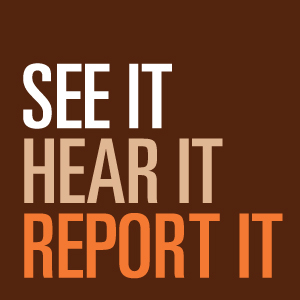 It’s On Us is a cultural movement aimed at fundamentally shifting the way we think about sexual assault. BG It’s On us is reframing sexual assault in a way that inspires everyone to see it as their responsibility to do something, big or small, to prevent it. During the 2017-2018 academic year, BG It’s On Us began hosting student-specific meetings in addition to the advisory group meetings that have been in place since the start of the initiative. Several collaborative events and programs took place throughout the year, including Build the Best BG, Tie Dye and Title IX, Denim Day, The Clothesline Project, Sexual Assault Awareness Month 5K and Dog Walk, and the inaugural What Were You Wearing? event, an exhibit by sexual assault survivors to challenge victim-blaming statements.

In partnership with the Wellness Connection, the Office of Residence Life developed an awareness campaign called Mustache (must ask) For Consent. The goal of this initiative was to educate the University community about the importance of asking for consent and what consent means. Residence Life utilized campus posters, mirror clings, handouts, condom wallets, staff T-shirts and a robust social media initiative to guarantee student awareness of the campaign.

Step Up Step In

The Step-Up, Step-In initiative is a call to action to BGSU faculty, staff and students to be active bystanders. The initiative encourages people to create a culture of shared respect by stepping up or stepping in when they see a troubling situation. The initiative was originally funded by the Ohio Department of Higher Education to reduce the risk for and incidence of relationship violence, sexual assault, stalking and sexual harassment. BGSU Recreation and Wellness received a 2019 NIRSA (National Recreational Sports Association) Creative Excellence award for the large format installations across campus featuring the Step Up - Step In messaging. These large format graphics were designed and installed creatively to encourage students and staff to interact with the messaging by physically stepping up or stepping in, showing support for the initiative.

Standing Together Against Sexual Violence and Misconduct (Informed-U) sessions are based on small-group discussions. Informed-U provides the framework for learning, but puts the actual learning experience in the hands of students. Student facilitators are trained to deliver discussion-based learning sessions to groups of six to eight students at a time. While the facilitator manages the process and logistics of the 1.5- to 2-hour sessions, participants take the lead in running it. Participants leave their sessions with a broader perspective and deeper understanding of sexual violence and misconduct, and also with strategies they have worked through together for how they can make a difference. The result is a stronger connection to community and greater commitment to improving campus culture.

In June of 2019, several BGSU staff members became trained in the Green Dot College Prevention Strategy. Green Dot is a comprehensive violence prevention program. Its objectives are to decrease the likelihood of (1) dating and domestic violence, (2) stalking, and (3) sexual assault. Staff members will start to implement the program during the 2019-2020 academic year.

See It. Hear It. Report It.