Fulbright Fellowships to Send MACIE Graduates to Mexico and Rwanda 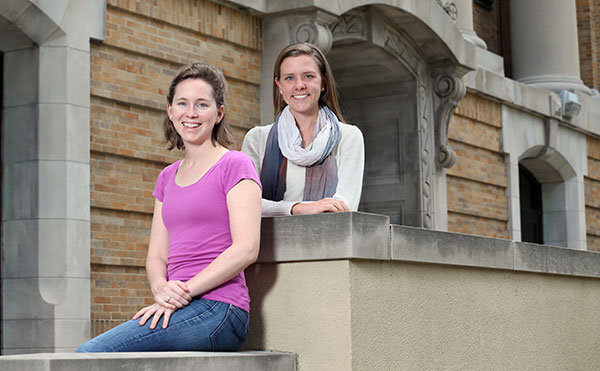 Two BGSU students will be trading their American classrooms for others in Mexico and Rwanda this August as recipients of Fulbright English Teaching Assistant Fellowships. For both, it will be the next step in a series of international experiences.

Samantha Boss will be headed to Mexico after her August graduation, and Jessica Batterton will teach in Rwanda; she graduated May 8. Although they do not yet know their exact assignments, both are eager to go abroad again. Both women were Peace Corps volunteers, and both received their graduate degrees through BGSU’s Master of Arts in Cultural and International Education program (MACIE), a Peace Corps Fellows program.

The Fulbright U.S. Student Program is sponsored by the U.S. Department of State’s Bureau of Educational and Cultural Affairs. Recipients of Fulbright grants are selected on the basis of academic or professional achievement, as well as demonstrated leadership potential in their fields.

Although they chose different areas of specializations in their graduate program, Boss and Batterton share a love of language and literacy that they hope to bring to others.

Boss, from Solon, Ohio, spent her Peace Corps service in in Guatemala, where she was a municipal health coordinator focusing on health and hygiene for 14 elementary schools in and around Zunil, a highlands town of about 20,000. Fluent in Spanish, Boss also learned the local language of K’iche’ and became interested in trilingualism, common in Latin America. At the end of that assignment, she extended her stay another year to work in literacy efforts.

In her MACIE program, she concentrated on Teaching English to Speakers of Other Languages (TESOL). “The TESOL classes balance the MACIE coursework in theory with practical learning,” she said. “Eventually, I’d like to work in book publishing with indigenous populations, mentoring local writers and helping provide a way for them to publish in their own languages.”

Boss will gain additional teaching experience during her MACIE required internship this summer, as a paraprofessional with the Fremont schools’ Ohio Migrant Education Center.

Batterton, from Vienna, Va., as a Peace Corps volunteer worked in Mozambique teaching English in the district capital of Inhassoro, a fishing town on the Indian Ocean.  “I taught English to students in eighth, ninth and tenth grades, which was the highest level in Inhassoro at that time,” she said (today classes go up to 12th grade). “I had students from 14 to 50 years old. The older ones were in the night classes I also taught.”

Batterton’s MACIE concentration was in Educational Development and Marginalized Populations, and included classes in political economy, ethnic studies and history.

“I gained a lot of knowledge that will help me understand the local context and how policies affect local populations,” she said. “I’m able to think more critically now about why things are happening.”

She enjoyed her graduate assistantship during her first year of graduate school as a writing consultant at BGSU’s Learning Commons tutoring center, and said she is eager to get back into one-on-one teaching. In Rwanda, she plans to start a theater club that would combine English and Ikinyarwanda to help students improve their English and to enable people of different generations to connect. She also has an interest in national language policies and how they affect populations. In 2008, Rwanda changed its language of instruction from French to English. English is currently the language of instruction in secondary schools.

“I’m curious to see how that process has unfolded,” Batterton said.

Their love of international culture began early, said Batterton and Boss, with family trips here and abroad. As a high school student, Boss traveled to Ecuador, and as an undergraduate majoring in international studies and development at American University in Washington, D.C., she participated in study abroad in Argentina and Nigeria.

Batterton’s “love of travel and sense of adventure” developed from a young age, she said. She majored in history and Spanish at the University of Virginia, and studied in Peru. Her Spanish skills translated fairly well to Mozambique, she said, where the national language is Portuguese.

BGSU has been successful in recent years in helping graduates obtain student Fulbright awards, whether in research or teaching. Boss and Batterton give a lot of the credit to BGSU Fulbright Program Adviser Jenifer Chambers, director of education abroad and international partnerships in the Office of International Programs and Partnerships, who shepherded them through the process. “Jenifer Chambers is amazing!” they agreed.

The Fulbright Program is the flagship international educational exchange program sponsored by the U.S. government and is designed to increase mutual understanding between the people of the United States and those of other countries. The program operates in over 155 countries worldwide.