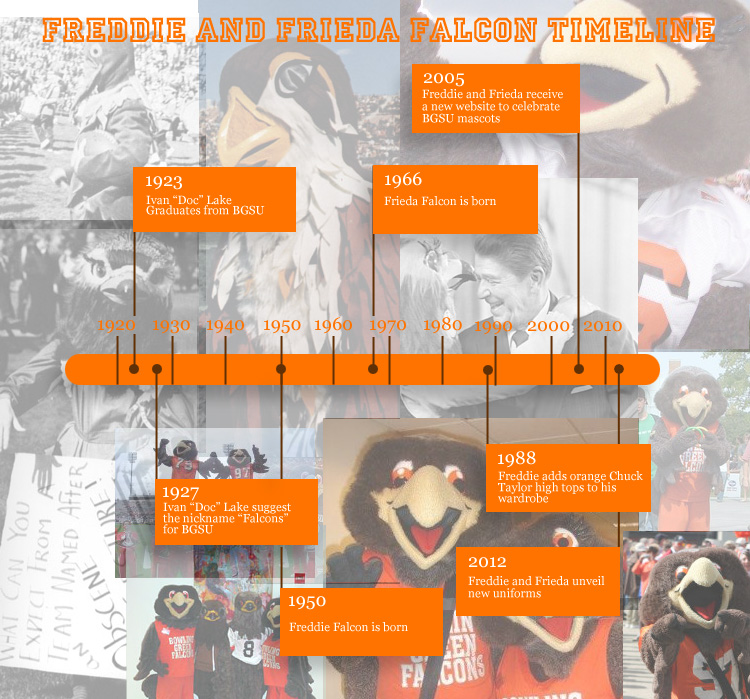 The Origin of the Falcon Mascot
Until 1927, Bowling Green State University was referred to as Bowling Green Normal University, for its teaching training curriculum. The school’s nickname was “The Normals”. That year a man named Ivan “Doc” Lake, who was a distingushed 1923 graduate of the University, and active athletics booster, suggested that the University needed new nickname. Doc Lake, then a sports reporter for the local Sentinel Tribune newspaper, had just finished reading an article about falconry. He suggested the University rename its nickname and mascot, “The Falcons.” He felt the bird was a fierce fighter with speed and courage. Doc Lake's suggestion of “The Falcons” met with instant general approval by members of the University.

The Birth of Freddie Falcon
Freddie Falcon was born in 1950 in the minds of the members of the Alpha Phi Omega fraternity. The idea was to try and create school spirit at BGSU athletics events. On January 16, 1950 at the BGSU vs. Ohio University basketball game, Freddie Falcon made his debut appearance introducing himself to the BGSU community. Under the head created from papier-mâché, a feathered cape and brown sweat suit outfit was Bob Taylor, BGSU’s first Freddie Falcon. 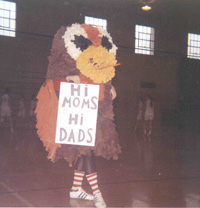 Frieda first joined Freddie at BGSU on February 25, 1966 as Mrs. Freddie Falcon. Contrary to what one might think, Mrs. Freddie Falcon was actually a male cheerleader in disguise. As an officially-recognized mascot, Frieda re-emerged in 1980 as Freddie’s little sister and sidekick. Sue Sheard played the first official female Frieda during the 1980-81 school year.

Interestingly, the 1970-71 women’s basketball team had also created a version of Frieda Falcon. According to members of that team, their Frieda was made of chicken wire stuffed with brown and orange crepe paper. She appeared at home games and would go out to center court at half time and lay an egg inscribed with “beat (the opposing team).” Frieda appeared at numerous women's games during the 1970s. This Frieda was created largely because Freddie did not attend the women’s games.

The spirited birds can be seen rooting for BGSU at football, men’s and women’s basketball, hockey and volleyball games, as well as just roaming around campus. The identity of the actual people who are selected to be Freddie and Frieda are not revealed until the end of the basketball and hockey seasons.

Through the years Freddie and Frieda’s appearances have changed several times, perhaps by accident or maybe on purpose. During the summer of 1950, the old Falcon’s Nest (home to Freddie and Frieda) was located in a log cabin on the current site of the Bowen-Thompson Student Union. Apparently, some hungry mice got into the cabin and devoured Freddie’s papier-mâché head right down to the chicken wire frame. The following year, Freddie's head had a new look. Instead of papier-mâché, he wore something resembling a rubber chicken mask. Freddie and Frieda have also been known to sport their trademark orange Chuck Taylor’s, incorporated into the newest costume as comic looking high tops with Falcon heads on them.

In order to become Freddie or Frieda Falcon, one must complete and online application.  This application typically opens the week after the current Birds are revealed around the beginning of February.  The current year’s mascots and their adviser review applications.  Those who are passed on to the next stage in the process will interview with the current mascots, the adviser and alumni Birds.  Those who make it past the initial interview are tested several other ways before the final candidates are selected.

According to Bob Bellamy, Freddie Falcon '88-'89, he was the one who came up with the idea to add some stylish orange Chuck Taylor high tops to Freddie and Frieda's wardrobe. Most groups after Bellamy have continued the tradition.

Contacting Freddie and Frieda Falcon
If you are interested in contacting The Birds, you may do so by e-mailing them at TheBirds@bgsu.edu.