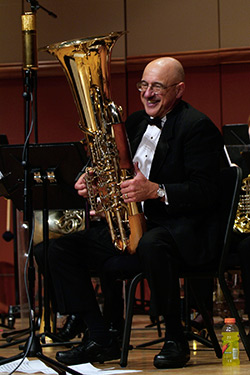 Audiences at the upcoming concert by the Wind Symphony have two special treats in store: the premiere of a commissioned work by renowned composer Samuel Adler and a performance by legendary tuba player and guest artist Daniel Perantoni.

The symphony, under the direction of Dr. Bruce Moss, will perform at 8 p.m. April 15 in Kobacker Hall at the Moore Musical Arts Center.

Moss writes of the Adler piece, “The work is a beautiful adagio, titled ‘The river that mines the silences of stones, an Adagio for Wind Ensemble’ (from ‘The Book of Hours’ by German poet Rainer Maria Rilke), and was commissioned by BGSU Bands, our Mid American Center for Contemporary Music, and nine other university band programs.”

Perantoni joins the Wind Symphony on the “Concerto for Tuba,” by Robert Jager, and will offer some entertaining encores. The Tuba Provost Professor at the Jacobs School of Music at Indiana University, Perantoni, or “Mr. P” as his students call him, is a legendary tuba artist, teacher and pedagogue as well as a trailblazer in a variety of genres including work as a solo recitalist, chamber musician, jazz musician, and instrument design. He was given the Lifetime Achievement Award by the executive board of T.U.B.A.

A true legion of his former students hold prestigious positions in major performing ensembles and music schools around the world, a testament to his abilities as a teacher, mentor and friend. He is cited as a “tubist’s tubist,” whose playing has a “lyrical, clear, and singing tone, along with his impeccable musical style.”

Perantoni has been a featured artist in Carnegie Hall, the Monterey Jazz Festival, the Spoleto Festival U.S.A., the Adelaide Festival in Australia, the Banff Centre for the Arts in Canada, the Montreux Brass Congress in Switzerland, and recently as soloist throughout Europe and Japan. He is a founding member of the Summit Brass, Symphonia, the St. Louis Brass Quintet, and the Matteson-Phillips Tubajazz Consort, and has released numerous solo albums and chamber music CDs.

Other works for the April 15 concert include: “Angel of Mercy” by David Maslanka, “Masquerade Overture” by Carl Nielsen, and “March, Op. 99” by Sergei Prokofiev.

Advance tickets are $3 for students and $7 general admission and may be purchased online or by calling the box office at 419-372-8171. All tickets are $10 the day of the performance.