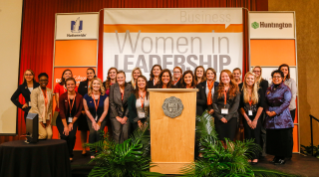 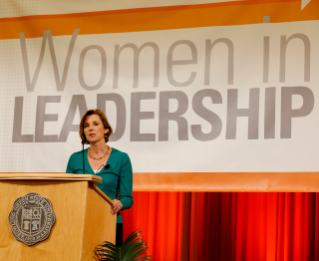 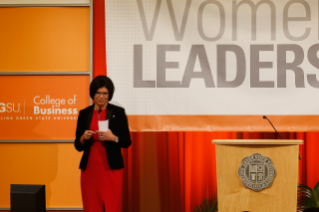 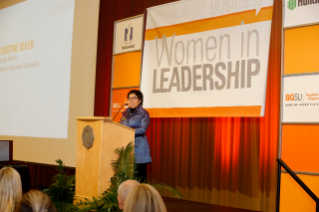 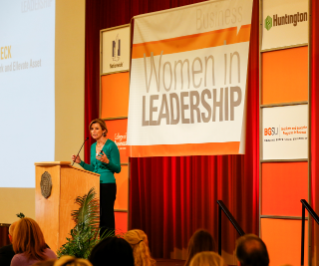 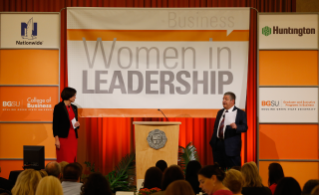 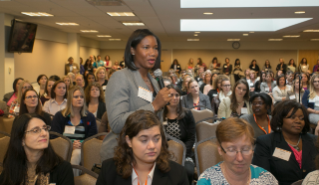 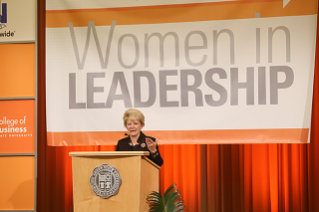 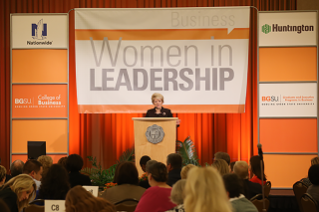 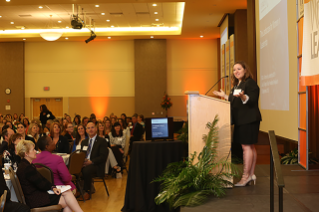 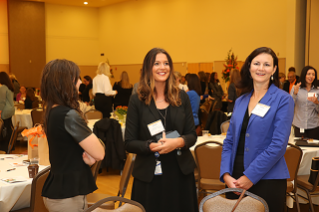 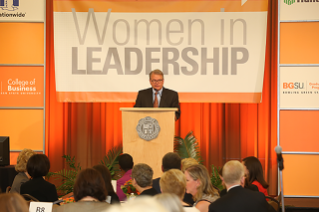 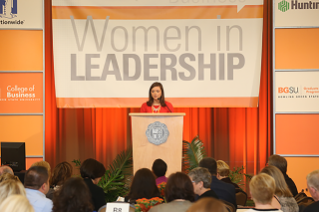 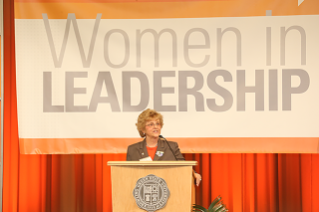 Krawcheck, Chair of Ellevate Network and Ellevate Asset Management and the Former Bank of America President of Global Wealth & Investment Management, was the keynote speaker at the 4th Annual Women in Leadership Conference presented by the BGSU College of Business.

She shared her career journey over the past several decades and had the audience laughing and leaving inspired to make a change in their organization. “Start to have the courageous conversation, it’s about bringing diversity to the forefront,” Krawcheck stated.

Krawcheck talked about risk taking and encouraged participants to take that chance. “Nobody cares as much as you do if you fail. I promise.”

“Building an inclusive environment begins with tone, leadership and innovation,” Deb DeHaas, chief inclusion officer and national managing partner of the Center for Corporate Governance for Deloitte told the audience. DeHaas drives Deloitte’s strategy to recruit, develop and promote a diverse workforce fostering an inclusive environment where leaders thrive. Deloitte’s implementation of gender diversity is a benchmark for many other institutions.

“Being focused on inclusion brings the culture of Nationwide to life,” stated Shore. “When you activate a group of people who are passionate about something and give them a voice in the process, it makes a difference,” Shore continued. “It’s not enough to have good business results if you’re not leaving the community better than you found it,” Pizzi concluded.

The next Women in Leadership conference will be held on October 21, 2016. Previous keynote speakers have included: Sherron Watkins, the former Enron Vice President of Corporate Development who was the whistleblower for Enron’s accounting irregularities in their financial reports; and Amy Dubois Barnett, Executive Editor at ESPN and former Editor in Chief at Ebony.

Learn why you need more women leading your organization. This conference isn't just for the women in your organization, bring the men too! Presenters will share research, provide implementation strategies, and discuss outcomes of a gender diverse organization.

Position: Chair of Ellevate Network and Ellevate Asset Management, Former President of the Global Wealth & Investment Management Division of Bank of America, and one of the most respected voices on Wall Street.

Krawcheck is the past president of global wealth and investment management for Bank of America, the largest wealth management business in the world. Her track record includes helping to reverse the decline in Merrill Lynch’s profitability and Advisor headcount; to stabilize US Trust while at Bank of America; separate research from investment banking at Citi to restore the business’s reputation and profitability in the wake of the Wall Street research scandal; and integrate and launch MerrillEdge, Merrill Lynch’s online offering.

In addition, alone among senior Wall Street executives, Krawcheck reimbursed individual investor clients for a portion of losses incurred during the financial downturn from poorly performing products sold by Citi and, later again, at Bank of America.

Krawcheck joined Citi in October 2002 as chairman and chief executive officer of Smith Barney, where she oversaw the global management of the Smith Barney and Citi Investment Research businesses. In 2004, she was appointed chief financial officer for Citigroup.

Earlier, Krawcheck was chairman and chief executive officer of Sanford C. Bernstein and Co. She began her career as a research analyst, covering the financial services industry, a role in which she was consistently ranked first in her field by “Institutional Investor.”

Krawcheck was named number 9 on Fast Company’s “100 Most Creative People 2014” list, as well as one of “10 Up and Coming Leaders to Watch” by Entrepreneur Magazine. During the research scandals, Fortune Magazine called her “The Last Honest Analyst” and noted that hers was the most influential voice for research quality and integrity. She has been listed as one of Forbes’ and Fortune’s “Most Powerful Women” in business and U.S. Banker’s top “Woman to Watch.” She is a past recipient of CNBC's “Business Leader of the Future Award,” was one of Time magazine’s “Global Business Influentials,” Fortune’s “Most Influential Person Under the Age of 40” and an “Institutional Investor” top CFO in financial services.

A native of Charleston, S.C., Krawcheck attended the University of North Carolina at Chapel Hill on the Morehead Scholarship and graduated in 1987 with academic honors in journalism and political science. In 1992, she received a Master of Business Administration from Columbia University.

Deb DeHaas is Chief Inclusion Officer and National Managing Partner of the Center for Corporate Governance for Deloitte LLP. She drives Deloitte’s strategy to recruit, develop and promote a diverse workforce fostering an inclusive environment where leaders thrive. DeHaas is also responsible for Deloitte’s boardroom programs that support corporate boards and directors in fulfilling their governance-related responsibilities.

Her community involvement and philanthropic efforts have led to her recognition by numerous local and national organizations. She was inducted into the 2012 Junior Achievement Chicago Business Hall of Fame and received the 2010 City Year Chicago Ripples of Hope Award, the American Red Cross of Greater Chicago 2008 Heritage Award, and the YWCA’s 2006 Outstanding Women’s Leaders Award for Community Leadership. She was the first Chicago recipient of the 2005 Athena Award. She was the recipient of the Chicagoland Chamber of Commerce 2004 Daniel H. Burnham Award, the Anti-Defamation League 2004 Women of Achievement Award, and the 2003 United Way Campaign Chair Award.

She graduated from Duke University with a Bachelor of Science in Management Science and Accounting. DeHaas is a Certified Public Accountant and a member of several state and national professional societies, including the AICPA and the Illinois CPA Society.

Chicagoland Chamber of Commerce – Past Board Chair

Duke University, Trinity Board of Visitors

Executives’ Club of Chicago – Immediate Past Chair, Board of Directors

Museum of Science and Industry – Board of Trustees

Northwestern University – Board of Trustees; Kellogg Global Advisory Board

The Chicago Network – Member and Past Board Chair

United Way of Metropolitan Chicago – Vice Chair and Past Board Chair

World Business Chicago – Board of Directors

As vice president and center leader of the Catalyst Research Center for Corporate Practice, she distinguishes sound talent management strategies from programmatic fads and documents the best practices. In her position, she leads multiple groups in evaluating global corporate and professional strategies to advance diversity, inclusion and business results. Nugent plays an integral role in developing strategies and implementing milestones for the center. Her work also consists of investigating and researching organization-specific diversity programs and workplace environments and providing actionable recommendations.

Nugent frequently speaks to corporate and public audiences and the media on topics including women’s leadership and advancement, mentoring, diversity and inclusion strategies, LGBT inclusion, and the Catalyst Award, which she chaired for over six years. She has written numerous external book chapters as well as many Catalyst publications, including a suite of company practices and Catalyst Award-winning initiatives such as “Making Mentoring Work” and related tools; and “Global Lesbian, Gay, Bisexual, and Transgender Inclusion: Advocating Change Across Contexts.”

In addition to her extensive consulting, research and public speaking experience, Nugent taught a course on gender in the workplace as a former adjunct assistant professor at New York University’s Robert F. Wagner School of Public Service. She holds a master’s degree in industrial/organizational psychology from New York University and received her bachelor’s degree in psychology and English from Ohio University, where she graduated with top honors.

Pizzi began his career at Nationwide in 1978 as a personal lines underwriter in Harrisburg, Pa., and held a variety of underwriting and service positions in Canton, Columbus and Annapolis before being named state officer of Delaware in 1994. He was named regional vice president for Virginia in 1997 and for New York in 1999, and was elected senior vice president of regional operations for the northern region in 2003. He served as president and COO of Nationwide Insurance from 2005-14.

Pizzi serves as board chairman for the Insurance Institute for Business and Home Safety. He also is a board member of the Buckeye Ranch holding company.

He holds a bachelor’s degree in criminal justice from Mansfield University and the Chartered Property Casualty Underwriter designation.

Nationwide, a Fortune 100 company based in Columbus, Ohio, is one of the largest and strongest diversified insurance and financial services organizations in the U.S. and is rated A+ by both A.M. Best and Standard & Poor’s. The company provides a full range of insurance and financial services, including auto, commercial, homeowners, farm and life insurance; public and private sector retirement plans, annuities and mutual funds; banking and mortgages; and pet, motorcycle and boat insurance.

She has 29 years of experience in the property and casualty industry, including 18 years in leadership positions across Nationwide in a variety of business functions including sales, underwriting, product/pricing, customer service and general management.

She and her husband, Alan, have been married for 29 years and have two children, ages 25 and 20.

Thank you for your interest in the annual Women in Leadership conference!