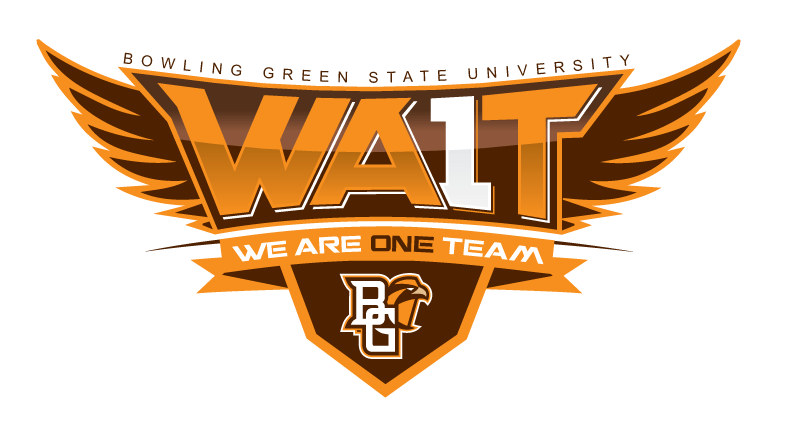 Use Your Passion for Sport to Make a Change! ALL ARE WELCOME!

WE ARE ONE TEAM (WA1T) is an umbrella initiative for multiple minor projects that promote social justice through sport at BGSU, including but not limited to projects addressing:

Join an Award-Winning Initiative to Promote Social Justice Through Sport

WE ARE ONE TEAM (WA1T) uses sport as a forum to create a dialogue and to promote friendship between stereotyped groups on campus, including but not limited to BGSU Athletics, minority groups, faculty and administration, and the general student body. Through the power of sport, WE ARE ONE TEAM (WA1T) aims to strengthen the sense of community at BGSU by creating awareness of social injustice and by facilitating an environment that values inclusion, diversity, and acceptance. As a university-wide movement, WE ARE ONE TEAM (WA1T) represents a strong group of advocates for positive social change who are united by their mutual love and passion for sports.

WE ARE ONE TEAM (WA1T) is a first-of-its-kind initiative in the United States. As a truly interdisciplinary and interdepartmental initiative, it brings together more than 20 different offices, departments, schools, activist groups, and student organizations at BGSU. Since its launch in the fall of 2015, WE ARE ONE TEAM (WA1T) has organized multiple panel discussions and a speaker event focusing on social justice issues in sport, has created a social media photo campaign for people to take a stand against injustice and discrimination, has launched the WA1T Sporting Day series bringing together two of the most isolated groups on campus (student-athletes and international students), and has held its inaugural WA1T Team 5K Walk/Run attracting more than 200 BGSU community members.

In 2017, WE ARE ONE TEAM (WA1T) was honored with the prestigious NCAA and Minority Opportunities Athletic Association’s Award for Diversity and Inclusion. The award is a partnership between the two organizations to recognize and celebrate the initiatives, policies and practices of colleges, universities and/or athletics conference offices that embrace diversity and inclusion.