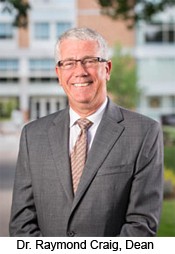 The Dean of the College of Arts and Sciences, Dr. Raymond Craig, generously agreed to an interview about his writing background, his most meaningful writing experiences, and his advice to writers. The interview has been lightly edited for clarity and brevity.

Tell us about your background:

I'm a California boy, first-generation in college. I was born in San Diego, raised partially there and partially in east Los Angeles. I went to college at UC Berkeley, majoring in mathematics, and natural resources management and ended up an English major. I did an honors thesis on William Butler Yeats, but got sidetracked doing a master's degree at Kent State on early American literature. I did my doctorate at UC Davis on semiotics/poetics in early American poetry.

I went into English because I wanted to be a writer. I wanted to be a writer in high school but was dissuaded by an encounter with a particular teacher. Returning to writing was important, but when I got into the classroom for the very first time as a master's student, I realized I really loved teaching. While I followed the usual trajectory for somebody that's going to study literature, I was also encouraged, at Kent, to get some background in composition. So I developed dual interests in grad school.

As a writer, I do predominantly academic work, but I had some experience doing freelance writing before going off to grad school. I wrote articles that went into tab-advertisers that came out every Wednesday up and down the Sierras. They were "fascinating" topics-golf course and restaurant reviews, hiking, swimming, fishing tips, and the occasional fluff piece on the literary history of the area.

My primary research area is textual studies, but I've done quite a bit of work in rhetoric, writing studies, and program development. The vast majority of my writing has been in one way or another connected to my work as an academic and now as an administrator. Writing is always in situ; the kind of writing that I do is defined as much by the context as it is by any sort of romantic idea about voice or genius. I've always been concerned about the work that a document was supposed to do, and that's even more true now in my writing as an administrator. There's more at stake. A lot of documents I write have an impact on people's professional lives and therefore the writing requires a higher level of care and attention.

What would you say you value the most about writing?

If we're talking about the writing itself, from the perspective of the writer, clarity, and clarity of intent are the most important things. I also like to have fun, and those can be in contention with one another. When I'm writing literary criticism, there's always a certain amount of play. When I'm writing as a dean, there's much less play. When I'm speaking or writing as a dean. I can get myself in trouble when there's play.

That's as a writer. When I'm reading writing, I'm also after that clarity. But when the opportunity is there, I also want writing to raise the level of discourse, of thought. When other writers pull that off, that's a good thing.

What would you say is the most meaningful writing experience that you've had?

I was one of the authors of the 2019 Gish Task Force report and I think that is a recent example of a very difficult task that I think we did a reasonably good job on it. It's difficult to write as a group, and I was really just so proud of our students. Our students did a great job. They comported themselves in a way that made it clear that they really had their act together, and they approached this issue as people should, with care and commitment. Was there passion involved? Yes. Did they let that dominate? No. They approached the task from a very reasoned perspective. My encounter with the students who were concerned about the name of the theater was really positive.

What advice would you give to other writers in your field, in your position, or in general?

The soapbox that I'm on is the same one that I've been on for 20 or 25 years: we must understand the importance of the in situ nature of writing practice. It seems to me that if people can understand that, then an awful lot of the criticism about writers and writing, and more importantly about the education of writers, goes away.

I was one of the co-PIs for a Center for Research in Workplace Literacy some years ago. That research revealed over and over again that a) everybody is an expert in writing (it doesn't matter what they do, where they come from, or what their education is, if someone writes, they consider themselves experts in writing); and b) people's understanding of the quality of writing is really skewed by whatever their personal perspective is and what their personal pet peeve is. And most people don't get beyond these things.

However, we also found that looking deeply at writing practice located always within a context, then we (and writers) understand better how to communicate and accomplish a task; we also began to understand better how to teach other people how to write well. It's analogous to putting yourself in the position of someone else and understanding from that perspective. When any individual is writing, they're writing out of that context, they're writing out of that particular moment. Teaching others how to write in context is critical.