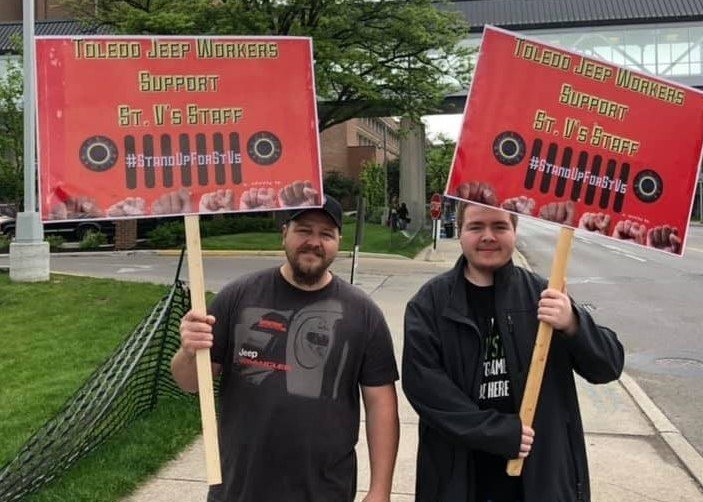 Dan Denton is a poet, short story writer, community activist, and union autoworker. He is a former winner of the Toledo City Paper’s annual poetry contest. His poetry has appeared online, and in print in Red Fez, Toledo City Paper, Toledo Streets, The Blue-Collar Review, and in several anthologies. His first chapbook, Bury My Heart in the Gutter, was published in 2018 by EMP Press. Dan is a co-editor of Cocklebur Press, a micro-indie chapbook publisher, and he hosts a monthly reading on the first Thursday of every month at Gathering Volumes in Perrysburg.

A college dropout, Dan has worked in factories for most of his adult life, finally finding a career at the Jeep Plant in Toledo, where he currently serves as a day shift Chief Steward in the Wrangler Assembly department. Originally from Illinois, he has lived in Toledo for the past 16 years. He includes reading, studying labor history, watching documentaries, and playing fantasy football amongst his hobbies.

What kind of writing (personally or professionally) do you do?

I write poetry, and short stories. I’ve also started 89 novels, but I’ve yet to complete one. That is amongst my long-term goals.

Somewhere along the line, I’ve become known as a blue-collar writer. I used to bristle at being pigeon-holed into one category, but I’ve grown to accept it. I am a blue-collar guy that loves intellectualism. At the end of the day, who better to write of the plight of the working people in America, than a writer that has worked in factories for the last 2 decades? Now, I take great pride in the fact that there are a lot of my brothers and sisters in the UAW that have embraced my poetry, and short stories.

I’ve also had the privilege of feature reading at several poetry festivals around the Midwest, and at a 100,000 Poets for Change event in Florida. Being accepted in those circles has given me all of the validation I need as a writer.

Who are your influences in learning how to write and pursuing writing personally and/or professionally?

My love for reading formed when I was a child. I grew up in a whacky evangelical religion, and we didn’t have a TV when I was a kid. I fell in love with poetry in particular, when I discovered Shel Silverstein in elementary school. There was a girl that I had a crush on in school, that also loved his poetry, so I started trying to write poems. I won a school wide poetry contest when I was in 2nd grade, and I’ve been writing ever since.

As an adult, Charles Bukowski and Richard Brautigan come to mind first, as far as influences go. Steinbeck would be high up on my list of favorite writers to read. He wrote two of the greatest American Novels of all-time (Grapes of Wrath, and East of Eden) both of which I’ve read at least a dozen times. I love Hemingway for his ability to tell a story, and Hunter S. Thompson for his relentless pursuit of freedom in his work. Modern writers I enjoy are Lidia Yuknavitch for her raw truth, and Matt Taibbi for continuing in the vein of Thompson.

I’m currently reading a David Sedaris novel, because my wife bought us tickets to see him speak in Detroit this October. My “to read pile” includes a couple of independently published novels, a Joseph Campbell book, a James Baldwin novel, a book by Dr. Cornell West, and a book containing the transcripts of Dr. Martin Luther King’s speeches to labor.

For what it’s worth, Stephen King’s book on writing is probably the best book I’ve read about how to write.

Can you describe your writing process? What does a typical writing session look like for you?

A lot of my work starts out as ideas, or sentence fragments, that form in my mind while I’m doing every day tasks. I can’t count how many poems I’ve written while building Jeeps on the assembly line. An idea sticks in my head, and I’ll jot down lines to a poem, or a short story, in between building cars. Sometimes it takes a whole 10-hour shift to get the bones going for a new piece, but that gives me something to work on when I get home.

I think this is why I’ve had the most success in writing poetry. I average 65 hours a week at the Jeep plant, and a poem is something that I can work on, and finish, over a few day’s span.

Since getting elected as a Chief Steward, my work has drastically changed, and my writing has been slow to adapt. I’m in my second month of a three-year term, and I’m just now starting to put words on paper again.

What advice would you give to writers in your field and beyond?

I get asked this a lot, actually. Whenever I meet an aspiring poet, and I get asked to check out their work, I usually gift them a copy of The Outlaw Bible of American Poetry, because it contains so many diverse genres of poetry. I think writing is a lot like other creative fields, in that it requires a certain amount of study and practice to get good at it. Reading is the most important tool I have as a writer. I still read much more than I write.

Outside of reading, a writer needs to write. Looking back at my early work, I can see how a lot of it isn’t very good. I went years without any success of getting published, but I stuck with it. Endurance and effort paid large dividends in my writing career, and would probably benefit most aspiring writers.

Also, I would add that making money doing something besides writing isn’t failure. There are a lot of creative people working in non-creative types of fields. Over the years I’ve met incredible artists, musicians, and writers working in coffee shops, factories, offices, retail stores, and driving cabs. A lot of creative people wind up doing a lot of different jobs to pay the bills while they’re finding their footing in their respective creative endeavors.