By sharing a handful of his own creative, personal, and political stories, Mr. Black will help shine a light on the incredible, transformative power of personal storytelling – whether such tales are shared on film, television, a theatre stage, courtroom, boardroom, or across that most powerful stage there is for change: your own dining room table. 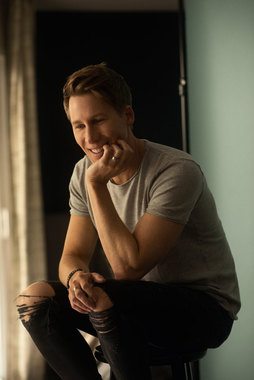 Dustin Lance Black is an Academy Award® winning filmmaker, writer, and social activist. He won the Oscar and two Writers Guild of America (WGA) Awards for his screenplay Milk, the biopic of activist Harvey Milk starring Sean Penn, and in 2018 received the Valentine Davies Award from the WGA for his body of work.

In 2017, Black created, produced, and directed the ABC miniseries When We Rise, which chronicled the true stories of the personal and political struggles, setbacks, and triumphs of a handful of activists who pioneered the modern LGBTQ+ rights movement. Black merged his creative and civil rights work in 2012 with “8,” a play based on the Federal Proposition 8 trial. The play broke records when it was first broadcast live online from the Wilshire Ebel Theatre and has now been staged in eight countries and all 50 states with all proceeds benefiting LGBTQ+ equality efforts worldwide.

In addition to his creative work, Black was a founding board member of the American Foundation for Equal Rights (AFER), which successfully led the federal cases for marriage equality in California and Virginia, putting an end to California’s discriminatory Proposition 8. He is also one of the co-founders of the Uprising of Love Coalition that seeks to raise awareness of violence and discrimination committed against LGBTQ+ people in the global community. Black served three years on the board of the Trevor Project, a national LGBTQ youth crisis hotline. And in 2009, Black was one of a handful of organizers of the National Equality March where he demanded full federal LGBTQ equality before an audience of over 200,000 demonstrators on the steps of the Nation’s Capitol.

Black has taught MFA screenwriting at UCLA; has lectured at a long list of international Universities including Oxford, Cambridge, USC, and Harvard; has appeared regularly on MSNBC, BBC, and CNN; has had four books published, including his best-selling, award winning memoir Mama’s Boy; and has been named as one of the 50 most powerful LGBTQ+ people in America for the last decade.

Event is free. Seating is limited and on a first come, first served basis.

Face coverings for everyone, regardless of vaccination status, are required in all public spaces on the Bowling Green State University campus.