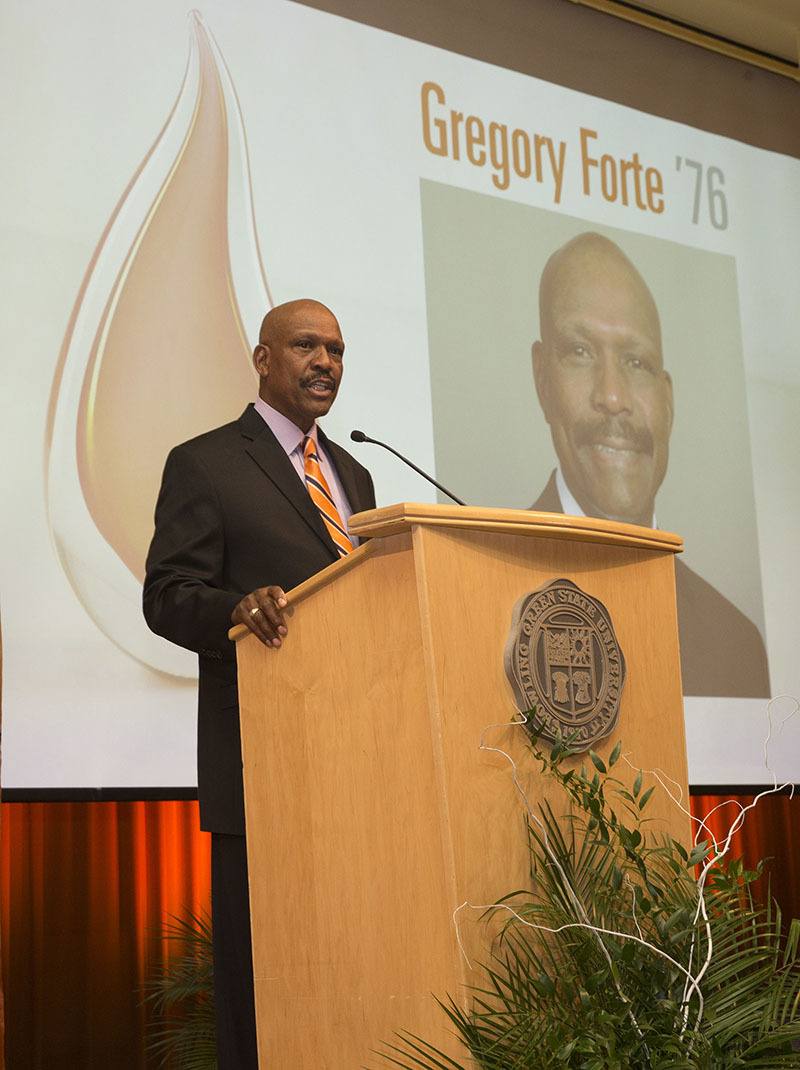 As state support for higher education continues to decline, endowed scholarships are proving to be a tremendous resource for BGSU – providing financial support for current and future students.

Following his graduation in 1976, Greg Forté would embark on a journey that took him away from BGSU for many years. He would marry, raise two children and advance in a career that led him up the corporate ranks at Proctor & Gamble. His accomplishments were recognized in 2017 when he was inducted into BGSU’s Academy of Distinguished Alumni.

As a young professional, Greg started his career with P&G directing a recruiting program. After three decades with the company, he retired as a senior director of sales and operations – no small feat. Over the years, Forté would reflect on his memorable days at the University each time he passed BGSU when visiting family and friends in Detroit from his home in Cincinnati. It would be years before that drive on I-75 became footsteps back on campus.

“I found a business program that prepared me well for my career, and beyond,” Forté said. “Looking back, going to BGSU was the best decision I could have ever made.”

When his children were older and his career allowed for more flexibility, Forté was able to reconnect with his alma mater. Not just through his own passion, but also through his son, Gregory Forté II ’20. Experiencing the campus and seeing the growth and development in facilities, through coursework and programming ignited a spark to get involved.

“I had to ask myself – what took you so long to come back to campus?”Forté said then he began to recall what had brought him to Bowling Green decades earlier.

“There was the depth and the breadth of the opportunities I found here, the broader mix of course offerings, the Greek life and the many other organizations you could get involved with,”said Forté, who now serves the University as a director on the BGSU Foundation Board.

Greek life was a focal point of Forté’s BGSU experience as a brother of the DE Chapter of Omega Psi Phi Fraternity, Inc. This lifelong brotherhood shines through in Forté. After years of supporting the next generation of members and maintaining close ties with his fraternity brothers, he is helping to coordinate the celebration of the 50th year anniversary since both BGSU and University Toledo chapters were chartered. To honor the milestone, Forté has initiated the effort to establish an endowed scholarship by making the lead gift, which he hopes will motivate fellow alumni to grow the fund.

“I think it’s vital that we help ensure that the next generation of students has the opportunity for a remarkable college experience, like we did,” he said.

The Forté family legacy at BGSU is one of engagement, passion, community and gratitude. Greg’s sister, Linda Forté, currently serves as a national trustee on the Board of Trustees, and is a member of the Changing Lives for the World Campaign Committee. His son, Gregory, has embarked on the MBA program within the Schmidthorst College of Business to become a two-time graduate. Extended family and friends are also part of the Falcon family.

Through Forté’s generosity, Omega Psi Phi will have scholarship opportunities that will transform the lives of future members. He represents the impact of being engaged both through BGSU and the community.

“My reconnection with BGSU has provided me with a great grasp of the student experience,” Forté said. “And it has shown me how important it is for alumni to give back to the University in appreciation for the great foundation and a start in our careers that we received. My counsel to all BGSU alumni would be to reach out and see the amazing good that this University has to offer.”